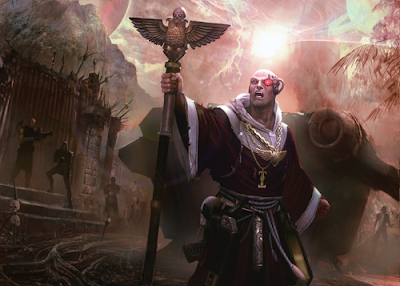 Rogue Trader is the amongst some of the best role playing opportunities out there, especially for Warhammer 40k fans. So when Fantasy Flight Games announces a new book for Rogue Trader its well worth our time to take a look at it.


This is the latest upcoming book from Fantasy Flight Games for Rogue Trader.

It is a Rogue Trader's duty to assist missionaries in spreading the Imperial Creed across the stars. In Faith and Coin, a Rogue Trader supplement for players and GMs, the complex relationships between missionaries and Rogue Traders come to life, with new Endeavors to complete and new worlds to convert. Find sacred relics, smite vile heretics, or embark on new Alternate Career Paths with the grace of the God-Emperor guiding you every step of the way.

New Endeavours for crews to take on as they work to spread the Imperial Creed as well as boost profit for their dynasty
Alternate Career Ranks for Explorers to gain powerful new knowledge and abilities, as well as weapons, equipment, relics, and more
The Sacred Heart, an exciting new adventure which allows Explorers to seek the legendary tomb of Saint Cognatius
6/12/2013
Natfka
Fantasy Flight Games, News Headlines