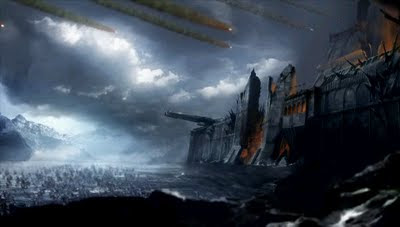 People have been waiting for more terrain and fortifications to fill in their quest for fun and interesting tabletops. Not to mention that we all want to rules for some of these to be in our standard games. One of the big questions has been, when are we going to see xenos terrain, and how come everything so far has been for imperial worlds? Some Answers below.


This is the third rumor bit, and includes discussion on new scenery and fortifications. Even though the rumor here about xenos terrain was released on my Faeit's Tarot weekly rumor round up post on Sunday, I wanted to make sure readers did not miss it.

via a very reliable anonymous source
The focus on apocalypse is new scenery and fortifications, with their own rules, that are legal for games of 40k and planetstrike as centerpieces and objectives.  Expect a lot more racially specific fortifications as well as more "imperial/generic" stuff in 2014 Q2.

I should add that the only thing holding back racial-specific fortifications is the designer's concept of what does and doesn't look good on the battlefield.

Things are all Imperial not for lack of creativity, but to keep the table looking coherent

Even when both players deploy fortifications on opposite sides of the table, the argument is that this was once an XYZ world where one faction controlled both and now some of the territory has been taken.

Provided only one faction puts down fortifications then it doesn't really matter what race they belong to, as suddenly now you're fighting on the corresponding race's world, or outpost, etc.

Most players, however, focus on Imperial scenery (either using the CityFight buildings, or their own home made scenery) as it is easy to construct, very linear in design and able to be created with a myriad of materials a lot more easily than say Eldar or Tau.  I say that just to explain that chances are 90% or more of the fortifications we get are going to be Imperial in design, but open to all.
6/25/2013
Natfka
40k, 6th Edition, Rumors, Warhammer 40k