Is This an Eldar Bomber? 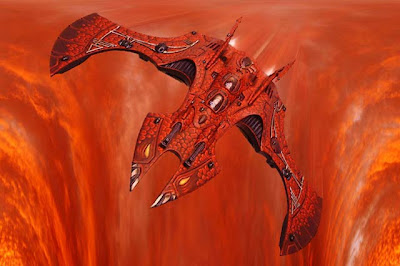 There has been some talk of an Eldar Bomber that was mentioned in earlier Eldar rumors that did not make the release. If there was, could it be waiting for something alongside the Dark Eldar Voidraven? Of is it just a mistaken identity, and it actually is the voidraven?

An artists rendering of what the new bomber may look like is below.

Below is a link to an artist's rendering and some mentioning of what the spotted Eldar Bomber looks like. So take a look, and you decide.

via Bigred over in the Bols Lounge
If you remember, there was chatter for months over TWO Eldar flyer kits that were in production.
The two fighters in the Crimson Hunter/Hemlock box was one AND there was a larger bomber that was sighted by sources. Its possible this bomber is being held for either a second Eldar wave, or Apocalypse. In anycase that bomber didn't ship in the codex-release wave.
Here is an artist mockup put together with help from folks 'in the know'.
The things you will notice compared to the fighter are:
-Lengthier fuselage
-Wider wingspan without the forward curving wings of the fighters
-Dual closely mounted engines per wing (4 engines in total)
-Dual cockpits (pilot and gunner)
-Probably bombs underslung as well
Now we wait...
eldar bomber-mockup.jpg
6/11/2013
Natfka
40k, 6th Edition, Eldar, Rumors, Warhammer 40k