Home » Events » Things That Go Bump In the Night: Mysteries of Valhalla

Things That Go Bump In the Night: Mysteries of Valhalla 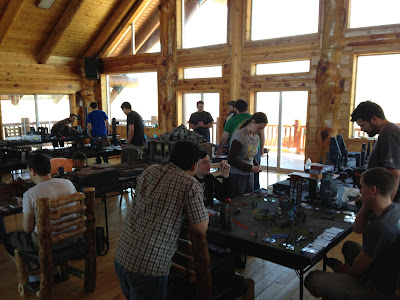 Followers here on Faeit 212 know that I attended the last Valhalla. I wanted to take a quick look at the Bestiary there, because there were some strange happenings in the late hours of the last few days of the event.

Late nights, with gamers up at all hours, and creatures of the prowl.

Valhalla was so much fun, and I was often up very late either getting in a game of 40k, a boardgame or two, or just up bsing. The cabin that Valhalla is in, is way up in the mountains, about an hour out of Salt Lake City. The cabin is absolutely huge, about 26,000sq ft. It is the largest privately owned cabin the United States.

So one morning, it was no surprise to see what appeared to be a lone wolf visiting us, literally right outside the main doors on the deck. It wandered around, checking out what was going on. Perhaps not sensing any Space Wolf players around, it eventually wandered off and I settled down for breakfast.

Of course were all checking out the pics of the wolf, simply because it was so much fun. Not to mention that where he was wandering is right next to the outdoor hottub, where I had been hanging out late the previous night.

For many people, a wolf might just be the downright scary, after all there are several places in the world where they just do not exist. However, something much more sinister was happening inside the cabin.

No one knows, or at least no one is saying exactly what happened, but a large cat woke up a certain guest late that night while sleeping alone in the darkness of his room. Well, some hysterical  laughing might of been the initial cause of the waking, but I am going to stick to the prowling cat story. What exactly happened at that moment with bobcat incident is best left to wild conjecture, as it did not stay there. In fact its hunt continued.

The next morning went on just well and fine, however, our local Bobcat was missing. With no sign of the large cat, it was a morning mystery. Whispers and innuendo declared the beast was simply waiting, perhaps in a bathroom waiting to pounce on anyone that entered.

By luck or chance, its primary victim had emerged unscathed, and rather oblivious to the danger that awaited him if only he to get up and use the bathroom. In fact, the bathroom door there had been locked, and because of that, perhaps a life saved.

A ton of Great Fun. The mystery of exactly what happened will have to remain a Valhalla secret. I know another Valhalla is just around the corner coming in August. If you are headed there, be wary. You just may never know what beast is stalking you in those late hours.

If you are interested in going to Valhalla, by all means check out this blog from one of our long time readers here. He will be giving us a couple reports of the August Valhalla. There may even be tickets left, or for the one later in the year.