Home » Rumors » Tyranids » Will Tyranids Ever Get To Ally?

Will Tyranids Ever Get To Ally? 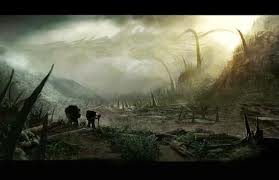 There is a sore spot hanging around 6th edition 40k. An out of place mark where an army just doesn't quite fit into the fold of 6th edition. That is the Tyranids codex in regard to Allies. Right now and since the onset of 6th edition it has felt like they have been left behind back in 5th edition.


While 6th edition has been exciting, fun, and the pace of releases exhilarating. I tend to feel that Tyranids are still back in 5th edition. Granted some of the rules are helpful for them, but I feel that this is a missed opportunity that I look forward to being rectified.

Tournaments, for example the TSFT Open coming to Portland here in September, have been gracious, and try and make up for this lacking. The tournament here is going to allow Tyranids to ally with themselves.

It is also rumored, and has been since March (not a new rumor), that Tyranids will be coming after Space Marines. This probably means the first of next year, or if lucky, the last part of this year. It will be interesting to see how Tyranids are going to turn out, and what Games Workshop does with them. I think this codex release is probably the one I am most interested in from a rules perspective.


Release Orders
Here are the release orders back from April. Nothing really new has come out since on the release order, and everything that has seems to come back to these originally posted rumors... although I have something exciting coming out first thing tomorrow morning, hint hint.

via Stickmonkey from the Faeit 212 inbox
4/1/13
May: High Elves
June: Eldar
July: Apocalypse
August: Lizardmen
September: Blood Bowl
October: Space Marines
November: Dwarves?
December: Hobbit
January: Tyranids
I had Dwarves a lot sooner than others, so its probably safe to leave a question mark.  It could possibly be brettonians or wood elves.   Im basing my prediction of Dwarves on where I recall them being design wise, which was right after lizardmen.

via another anonymous source
3/31/13
Games Workshop is aiming for an army book/codex every month. Its high elves, eldar, apocalypse, lizard men, marines then tyranids. I'm just not sure of the months and whether marines are October or November and what was in between marines and tyranids.