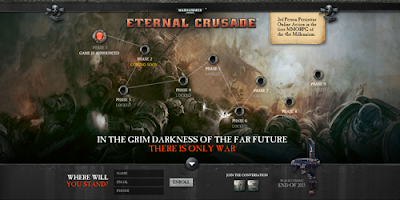 Eternal Crusade is a just announced MMO that has been making the news rounds since its announcement. While I was looking forward to this game, it wasnt until I read through this interview with Gamegeex that I finally saw the full potential of this game. Its a must play.

A huge thanks to Gamegeex for doing the interview, and there is more information on their site, so go check them out.

The highlights, include multiple worlds, an "Eve" scale to the game, 3 months campaigns, and much more. This game really has some lofty goals, that I can only hope do not get washed out over time.

There is only war.

Within the game universe there will be multiple planets, each utilizing a single-server technology Behaviour Interactive's team is currently testing to create a truly massive multiplayer experience. “Think of the largest MMO you know,” Miguel said. “Now double it!” Thriving landscapes become battlefields in a world where humanity is facing its last hour. “It's not if they will be wiped out, it's when. Humanity is minus one from extinction. Every jump they make to save themselves punches another hole to allow Chaos through.” The resulting culture is desperate and brutal.

The four player factions—Chaos Marine, Space Marine, Orks, and Eldar—begin their battle from a personal attack cruiser in orbit. The cruiser is capable of merging with your friends' ships, forming a social guild structure by creating massive warships where in-guild production, storage, and trade can exist. Endgame guilds will be able to actually fire on the planet's surface from their ship, a power they must be careful not to exploit.

“We have taken inspiration from Eve Online in shaping our economic system. We've dumbed it down a bit—no one should need spreadsheets to manage their virtual trade.” There is one currency: requisition points. In the military model the game embodies, a player will have to requisition weapons and armor at supply points. To use the items, the character will have to prove their worth through experience, rank, and training.

Eternal Crusade will follow a free-to-play model, but non-paying players are restricted in faction and progression. “They can only be Orkboyz! It takes five Orkboyz in the tabletop game to take down one Space Marine!” Miguel's excitement grew with every breath. Free players cannot progress in military rank beyond officer.

Much of the game relies on social checks. Officers, squad leaders, commanders: each rank commands the players beneath them, and all are ultimately ruled over by a Council populated by the best of the best. Missions are handed down through rank by the players themselves. Miguel is counting on the lowest ranks to obey their officers a third of the time at best. The catch? You don't progress in-game unless you learn to take orders—then eventually give them.  The social balance alone in this game is motivation enough to entice players to purchase premium content.

Obviously this is a PVP heavy game, and I was worried how a PVE/RP player such as myself might contribute to such a strict army structure. Miguel reassured me that there is a hefty need for diplomats, gatherers, crafters, and other non-combat roles. He estimates 60-70% of the players will choose active battle, with the others filling support roles and giving the offensive line something to defend. A player may make their way by saying, “Hey, if you take out that enemy, I'll give you 100 requisition points.” Or a group of miners might remind a squad of Marines that the resources are necessary to their faction, gaining some protection while they mine. Commanders may need to retire to a diplomatic position if they want to reach a position on the Council, and that position gives the greatest wartime powers of all.

While requisition points will be currency, campaigns will be won by the resources gathered and directed by the faction Council. If the Council finds a player strong and trustworthy enough, they can choose to funnel resources into establishing him as a Hero. This special class is granted abilities that can erase enemies en masse from the battlefield, changing the outcome in a few clicks. The abilities decay quickly, expiring at the end of a battle, so the Council must choose the Hero carefully.

The struggles where factions rise and fall and boundaries are shifted daily sound exciting enough, but the team is planning dynamic world events in three-month campaigns. Sweeping through planets one by one, each campaign will give players an epic struggle with clear winners. Miguel shared that he doesn't care for MMOs where the same things happen daily and everyone just moves forward. “There needs to be a victor,” he pointed out, “just as there needs to be a loser.” Players will earn badges and medals, marking them as campaign veterans seasoned on the field of battle.

I didn't get many details on the class system, but there may not be much need: The details have been written in Codex after Codex for the fifteen 40K armies and their chapters. Miguel plans to copy tabletop units stat for stat to make up the classes, complete with chapter variations. "I don't care about game balance at launch" he said. "War is not balanced. Why should a game about war be balanced?" Nevertheless, a system will exist to prevent a faction's monopoly of resources and overwhelming strength.  Tyranids, the monstrous beasties that make up the ultimate enemy, will level the playing field, as will an intricate weather system capable of wiping out terrain and fortresses. These random mechanics will be wielded by the developers as needed to keep the factions on equal footing.

Miguel promised more factions would be playable in the future. I brought up my personal favourite, the Necron army, and he assured me Necrons were the most popular army amongst his developers as well. The first four player factions are a great place to start, since they will provide straightforward classes that will be easy for players to understand.  Playing members of the other factions, especially Necrons, would involve a more complex knowledge of the game and battle system before the player found them effective rather than frustrating. Miguel doesn't plan to deviate from established lore, regardless. “I'm not worried about content. The 40K universe has enough content already for a hundred years of updates!”

I didn't even need to ask questions about the team's familiarity with Warhammer 40K; Miguel made it clear that every developer on the project is foremost a fan. I expressed my excitement and delight over everything he'd shared—this may be the first Warhammer game (Fantasy or 40K) which has truly grabbed my interest. Still, the gutsy designs are risky from a business standpoint. Miguel did scoff there—rightfully, because at that point I should have known better. "We are not making a game for publishers or marketing, we are making a game for the Warhammer fans." If Miguel and his team stay true to the bold strategy he's outlined, this MMO may wholly embody the spirit of the tabletop version.

For in the grim darkness of the future, there is only war.

Join the Eternal Crusade™ Starting in 2015

A new Warhammer® 40,000® MMORPG revealed.
MONTREAL, QUEBEC--(Marketwired - June 11, 2013) -
Editors Note: There is an image associated with this press release.
Behaviour Interactive and Games Workshop® proudly announce a new online game in theWarhammer® 40,000® universe: Warhammer 40,000: Eternal Crusade. Behaviour Interactive has obtained the rights to create a wholly new MMORPG persistent war experience for PC, PS4 and Xbox One set in Games Workshop's universe of the 41stMillennium. In the game, players choose a Warhammer 40,000 race and fight directly as one of their warriors in massive conflicts for territory. It will be up to each faction's community to determine their own destiny as they vie for control of an entire planet.
"I am thrilled to announce what will finally be the first MMORPG based on the Warhammer 40,000 license," said Miguel Caron, Head of Studio, Online at Behaviour Interactive. "Eternal Crusade's team are all MMO development veterans and with the support of Behaviour's 20+ years of experience this is going to be the online Warhammer 40,000 universe game that fans have been dreaming of for years!"
"Warhammer 40,000: Eternal Crusade is the second milestone in Behaviours new online strategic positioning after last year's Star Citizen Announcement." said Rémi Racine, President and Executive Producer of Behaviour. "We are very happy with the progress of the online studio and you should expect more similar announcements to come."
"The depth, breadth and sheer level of detail that the Warhammer 40,000 universe has after 26 years of continuous development makes it one of the great fantasy settings of our times." said Jon Gillard, Head of Licensing at Games Workshop. "Experiencing the thrill of first hand combat in this world of eternal conflict, with thousands of other players beside you, will be fantastic."
Warhammer 40,000: Eternal Crusade is currently in development for PC, PS4, and Xbox One and will release in late 2015.
Main features of the game include:
About Behaviour Interactive
Based in Montreal, Quebec, Behaviour Interactive (www.bhvr.com) is an independent world leader in the video game industry, employing 275 talented people in Montreal, Quebec, and Santiago, Chile. Since 1992, the company has developed over 140 fun games for everyone on all major platforms. Today, the studio specializes in creating engaging and reward entertainment built with market and platform in mind, through mobile, online and console games. Behaviour works with the industry's best media companies, including 505 Games, Activision Blizzard, Bethesda, Disney, EA, Eidos, Games Workshop, Konami, Majesco, Microsoft, Nickelodeon, Paramount, Sony, THQ, Ubisoft and Warner.
About Games Workshop
Games Workshop® Group PLC (LSE:GAW.L) is based in Nottingham, UK. Games Workshop designs, manufactures, retails, and distributes its range of Warhammer® and Warhammer® 40,000® games, miniature soldiers, novels and model kits through more than 400 of its own Hobby centres, the Internet and independent retail channels in more than 50 countries worldwide. Further details on the company can be obtained at www.games-workshop.com
Warhammer 40,000: Eternal Crusade - Copyright © Games Workshop Limited 2013. Eternal Crusade, the Eternal Crusade logo, GW, Games Workshop, the Games Workshop logo, 40K, Warhammer, Warhammer 40,000, Warhammer 40,000 Device, 40,000, the Double-headed Eagle device and all associated marks, logos, places, names, creatures, races and race insignia/devices/logos/symbols, vehicles, locations, weapons, units and unit insignia, characters, products, illustrations and images from the Warhammer 40,000: Eternal Crusade game and the Warhammer 40,000 universe are either ®, TM and/or © Games Workshop Ltd 2000-2013, variably registered in the UK and other countries around the world, and used under license. All Rights Reserved All Rights Reserved to their respective owners.
6/13/2013
Natfka
News Headlines