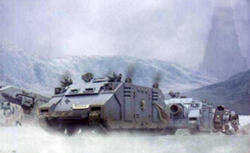 The very latest on the Space Marine codex shows us various Space Marine Rhino variants, including a Command Rhino and more. Wow, tactical options for the marines are going to be huge with this release, as the one codex with the most options is about to get bigger.


Please remember that these are rumors, salt is always required

via The Emperor Himself  on Warseer
Some info regarding the upcoming Space Marine Codex. Rhino variants to include a command Rhino, a medic Rhino and an armoured recovery Rhino. Each of these can be purchased as upgrades for the basic Rhino and provide enhancements to their Space Marine squad. Dreadnoughts to provide bonuses to nearby units owing to their 'Inspiring Presence'. These developments are inline with the design philosophy behind the new Codex to promote synergies between units to increase the tactical depth of Space Marines.
6/26/2013
Natfka
40k, 6th Edition, Rumors, Space Marines, Warhammer 40k