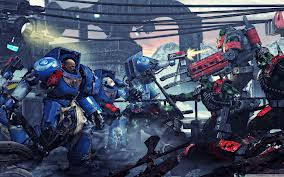 Space Marines are rumored, very reliably, to be the next upcoming 40k codex release. There is a lot of excitement about that, and with codex supplements that may be coming alongside or right after the codex release.


If you missed today's earlier rumors about codex supplements, follow the link.
http://natfka.blogspot.com/2013/06/what-armies-are-getting-codex.html

This is part 2 of a rumor set, which I separated by subject, so that things did not get lost in the mix. The next and last set of this, will be about fortifications and terrain.

Please remember that these are still rumors

via an anonymous source (reliable source)
Like we discussed many many months ago the Space Marine special character changes to Combat Tactics still exist, but are also now available for purchase as an upgrade to a generic HQ allowing you to play Ravenguard without Shrike, or Salamanders without Vulkan.

The special characters usually also include some other more specific army-wide changes included in the replacement of Combat Tactics to make them still desirable, as they represent a specific company, within a different chapter, etc.

Lastly, Ultramarines are not the focus of the Space Marine book any more.  Instead the pages describe the book representing any of the second founding chapters, and many of the founding as well who converted to following the Codex Astartes.  Outside of the over-abundance of Ultramarine special characters it's not "their book" anymore, which means it leaves things open for them getting a dedicated supplement as well.  If anyone rages about this being a cash grab and not just creative room to give Ultramarines the attention they deserve the same as any other Chapter, you're wrong.
6/24/2013
Natfka
40k, 6th Edition, Rumors, Space Marines, Warhammer 40k