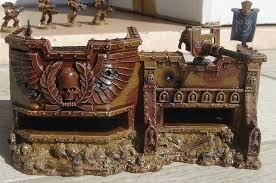 On the Games Workshop site under the description for the Imperial Bunker for the Wall of Martyrs, is a description that looks to obviously lead us to new releases that are possibly for Apocalypse. New defensive formations.


This is exciting, and here is a first glimpse at some of the new scenery options that look like they might be right around corner.

Here is a link to it as well.
http://www.games-workshop.com/gws/catalog/productDetail.jsp?catId=cat440312a&prodId=prod1780024a

via Old-Four-Arms on Warseer
on the GW site in the description of the Imperial Bunker :