A New Faction In Dropzone Commander 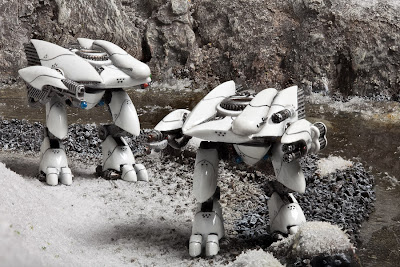 Now, I spent quite a bit of time talking with Dave, the designer and creator of Dropzone Commander. There is a little rumor bit that I have not yet really discussed. It may have been mentioned on one of the videos, but I had figured it was time to start the discussion.


The Rumor
While an expansion is in the works, so is a 5th completely new faction for the game.

This comes directly from casual conversation, and while I was not given any information on who the race was, I was told that they were are actually mentioned in the rulebook somewhere in the background.

Speculation on my part
So who are the new allies? Now this is speculation on my part, but I personally think it will be the race that created, or is somehow related to the White Sphere. Since the Post Human Republic are advanced cyborgs (of human decendants), I think this will mean a fully intelligent mechanized race. Necrons, Terminators, borg or the like.

This would be a archetype that the game does not have, and would easily flow into the game.
6/10/2013
Natfka
Dropzone Commander, Rumors