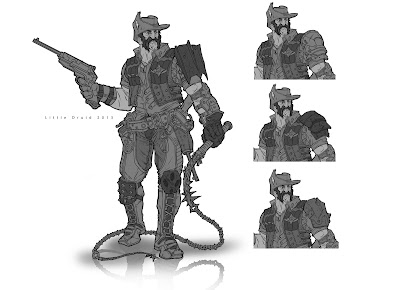 This morning I got a leaked image and some news for Dark Age. A new sub-faction for Outcasts is coming. This is exciting, as those of you that play this game, the Outcasts have some of my favorite models for the game (Mongo just rocks). I have always wanted the Outcasts expanded upon, and now it looks like its coming.


I love Dark Age, the artwork, and the rules. Its a hidden gem out there for skirmish games. It will be apart of the new site, and of course the game finder feature the new site will have.

Please remember that these are still rumors, although the image above makes it very solid.

The file name says Slavemaster 1, and the names in the above pic says Little Druid, (which I have learned is the artist's name)

via an anonymous source from the Faeit 212 inbox
An Outcast sub-faction is being released in Conflagration, the “Slavers of Chains Barrow”.


The Outcasts live out of the cities in Samaria, living a life of freedom in the Wastelands, away from the religous zealots of the Forsaken.

If you do not know Dark Age, here is a link to learn more.
http://dark-age.com/index.php
6/26/2013
Natfka
Dark Age, News Headlines, Rumors