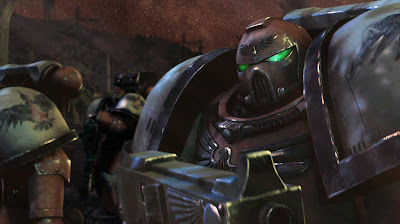 These are more than a little vague, but I figured with the rumor clamp down being so tight on the Space Marine side of things, we might as well take a look at the what is being talked about right now.


Here is the latest, Please remember that these are rumors, and definitely require a little extra salt.

via Puscifer
I haven't seen this posted anywhere else, so I thought I'd give you all a treat...

Some stuff regarding the new Space Marines Codex:

It is the next one to be released, but I was not told about the release date.

The codex is not Ultramarines heavy. There will be a much broader spectrum of Chapters.

There will be supplements for the more famous chapters: Ultramarines, Imperial Fists and White Scars were the ones mentioned. White Scars are the first out the gate.

The cover of the new dex has apparently got Sicarius on the front, while the White Scar Codex has a bike squadron racing towards the enemy.

No clue on authors. Rumour is Ward, but hell, he's rumoured for all of them right?

No rules that I can give you, but you can expect to see loads of new weapons and squads. Possible inclusions are the Land Raider Terminus (I think that's what it's called - it's festooned with Lascannons), a bigger form of Terminator and a rather large Dreadnought that is similar to a Contemptor - only bigger.

That's all I got.