Effects of the Scatter Laser on Forgeworld Models 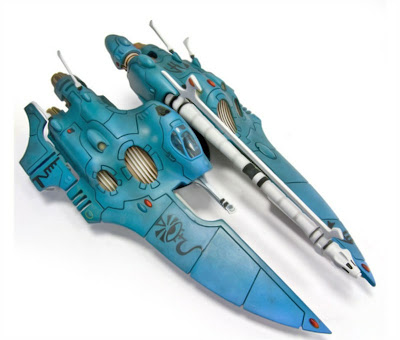 As often happens when a new Warhammer 40k codex is released, it takes a while for Forgeworld rules and models to be updated, and this can lead to some odd occurances, or changes.


Here is an email regarding such a change from the Faeit 212 inbox, and is well worth a look. The Scatter Laser is a powerful weapon in the hands of any vehicle that mount one alongside another weapon.

via Lotusflower from the Faeit 212 inbox
So I was talking with a friend and browsing the forgeworld website and I noticed the lynx is £74.00, which according to google is $114.90 also known as the price of a wraith knight. So I opened my copy of doom of mymeara and saw that the lynx can take a scatter laser. Unless I'm mistaken, since scatter laser now has laser lock, it will (usually) twin link the primary weapon. Basically you can get the same load out as the scorpion superheavy (twin linked pulsar/sonic lance) for 180 points cheaper, the only other loss being 1 structure point. My guess is that this makes the lynx super broken for it's points cost. Cobras can also do the same.
6/12/2013
Natfka
6th Edition, Eldar, Forgeworld