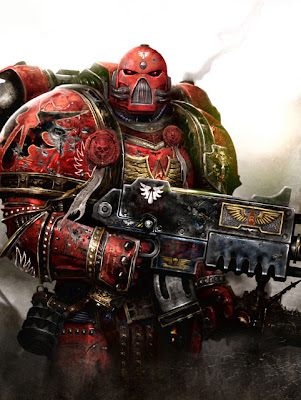 There has been a lot of talk since the arrival of the first Codex Supplement, on whether these GW Direct only supplements, will be released for many of the chapters we now have as full codices and whether new chapters will be detailed out in them.

Lets take a look and perhaps we can see what lies ahead.


First off, this is a discussion topic, nothing below are rumors, even though some may be discussed in broad terms.

Blood Angels, Space Wolves
Will Blood Angels, Space Wolves lose their primary codex to become a supplement? The answer really is a resounding no. It would be very odd to do this. Far flung rumors still have these two getting full codices, and I am going to stick to that unless something else shocking comes out. These codices are still a long ways out, but I do believe that the major codices, even if they are marines, will maintain their codex.

Ultramarines
I find it really difficult to grasp Ultramarines getting one. They are after all the guideline for every chapter to follow. While I can see their leaders getting special army wide buffs in the main codex, Ultramarines will most likely be the Space Marine codex.

White Scars, Salamanders, Imperial Fists, and more
Now these are the chapters I see getting their own supplements. They are chapters that could throw in a few other small misc rules and equipment with some indepth background, and make a book. They are each one of the original space marine legions, and I think that these present more of an opportunity for codex supplements. Salamanders are my first choice for a Space Marine Codex Supplement. I rather miss seeing all these guys from a few years back.

Black Templar
What is going to happen here? Is this a primary candidate for a supplement? Wouldnt that be cool if it was released this year as one, and arrived later in the same month as the Marine codex?

Who knows, I have not heard much on these guys for some time, except that no codex is being dropped. That really says nothing though in regards to whether or not it will be downgraded to a codex supplement.

Space Marine codex Supplements. This is meant to be a discussion, so lets hear your views on them and what it will mean for Space Marine players.