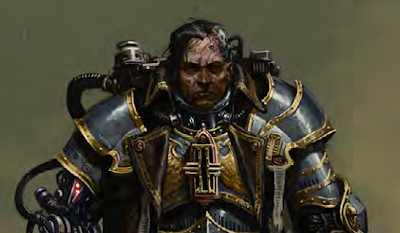 Faeit stared straight ahead, his eyes rolled back, his face clenched in blood. The large mans powered armour crackled with wisps of energy, its chest plate shattered from a massive blow that should of killed him earlier that day on the planet below. What secrets was the Inquisitor now lying witness to? With each image revealed, his body twitched, as unseen predators assailed the Inquisitor from the ether.

Breaking Rumors: Space Marines
Rumors come in sometimes while I am working on posts, and this is no different. Mistwarden has come through with the latest on exactly when we will be seeing our next Warhammer 40k Codex. Earlier rumors had it being released in October, but with this hard hitting release schedule..... September is Space Marines.

via Mistwarden on Faeit 212
Just going to drop this note as been seeing more and more marines stuff being talked about.
space marines to be expected in September as they are GW biggest money maker and as such they want to meet the sales of last year September release which was 6th edition starter set

Apocalypse
July 13th Warhammer 40k will get the next version of Apocalypse. This supplement is long awaited to be updated to 6th edition, and its definitely coming. Pictured leaks from the July White Dwarf revealed a Necron Monolith of Doom and a Khorne Skulldozer.

So what else was revealed this last week for Apocalypse?

via BramGaunt over on Warseer
1st: There is a new rulebook, if anyone still questioned that. Complete overhaul. The scale of additional shenanigans will be the same as with a regular rulebook, as well as limited items. Probably a collectors- and a gamers edition aswell (allthough I am only guessing that!).

2nd: The kits we have seen so far cover all the miniatures there will be for now (Khorne "Skulldozer" and Necron "Monolith of Doom + 2D6"). However, there are three new pieces of terrain, which apperantly are of apocalyptic size. A different source told me of a 'commad citadel' behind which the Wraithknight could easily hide.


3rd: Releasedate is the 13th of July, with Preorders starting the 29th (with the new WD, as usual). This is GW's big release this year.

via Best_Pone on Warseer
You'll also get some fortifications - giant gun/missile emplacements and the like. These are also designed to hook up with the Wall of Martyrs terrain.
As well as the Apocalypse rulebook, there's also a collector's edition and a gamer's edition.

via Opatija on Warseer
got some quick information about the upcoming release. It´s "just" what the employees were told

- Apocalyspe is mostly about formations with some minor benefits for the "units"
- There will be at least 2 waves for mini supply (Some of the missing miniatures will be released when their own 6th codex is)
- Each army is going to get a super heavy, beeing asked about such a huge release, they were told to keep the Allied Forces in mind, leaving Tyranids aside (speculated as an Imperial/SM Multipart kit) which will hit at around 125,-€ (It´s quite possible that the Chaos thing and the Monolith are the only ones! And Baneblades/Shadowswords are accessable via Allied Forces!)
- A large/multi part piece of Terrain fitting to the "Martyrs"-Line (80,-€/50,-€/30,-€)

Gamers Edition - it's going to include templates and dice but one very curious thing was said: "...containing a Apocalypse Rulebook in your language"

It was specificaly mentioned. I would not have thought GW might release a English-Only Book....but then i was reminded of Dfts...

Via The Dark General on Warseer
It's a dual kit approx size of baneblade box, but taller model. Makes either the Deathdealer or Lord of Battles.

Also there's a bunch of new data sheets, inlcuding some for those of us that bought multiple NEW models

It's also NOT the only Chaos models coming out, along with a few other Khorne...speedy guys... 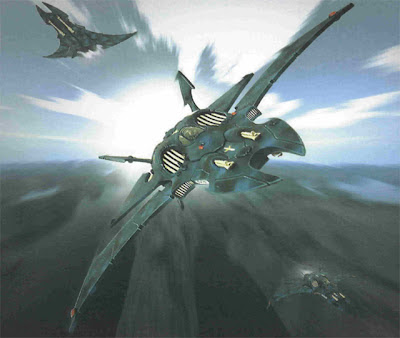 Eldar Flyer Kits
There is a missing Eldar bomber from the rumor mill, that may or may not be in fact the long awaited Dark Eldar Voidraven. Reports are mixed, and so are the rumors. Either way, something is out there, and even if its the Dark Eldar Voidraven, we are all waiting.

via Bigred over in the Bols Lounge
If you remember, there was chatter for months over TWO Eldar flyer kits that were in production.

The two fighters in the Crimson Hunter/Hemlock box was one AND there was a larger bomber that was sighted by sources. Its possible this bomber is being held for either a second Eldar wave, or Apocalypse. In anycase that bomber didn't ship in the codex-release wave.

The things you will notice compared to the fighter are: 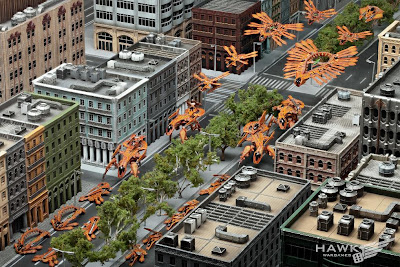 Dropzone Commander
This rumor for Dropzone Commander comes from myself (which is uncharacteristic since I report what is going on, rather than be a part of it. However at a recent event, Valhalla, I spent some time with the creator of Dropzone Commander. A part of the conversation turned to the future of the game, and here is what was revealed

via Natfka on Faeit 212
While an expansion is in the works, so is a 5th completely new faction for the game.


This comes directly from casual conversation, and while I was not given any information on who the race was, I was told that they were are actually mentioned in the rulebook somewhere in the background. 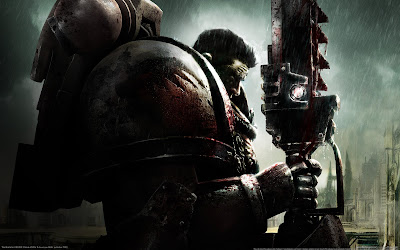 It is the next one to be released, but I was not told about the release date.

The codex is not Ultramarines heavy. There will be a much broader spectrum of Chapters.

There will be supplements for the more famous chapters: Ultramarines, Imperial Fists and White Scars were the ones mentioned. White Scars are the first out the gate.

The cover of the new dex has apparently got Sicarius on the front, while the White Scar Codex has a bike squadron racing towards the enemy.

No clue on authors. Rumour is Ward, but hell, he's rumoured for all of them right?

No rules that I can give you, but you can expect to see loads of new weapons and squads. Possible inclusions are the Land Raider Terminus (I think that's what it's called - it's festooned with Lascannons), a bigger form of Terminator and a rather large Dreadnought that is similar to a Contemptor - only bigger.