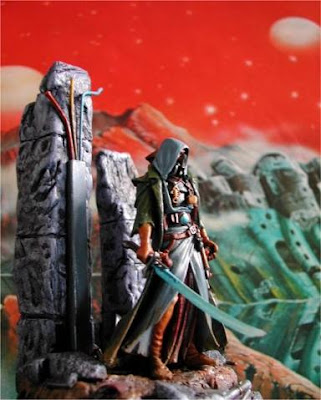 Its been awhile since we have looked at what is coming on down the road, I thought Sunday Morning (tired after playing against the new Chaos Daemons last night), was a good time to sit down and figure it out. After all there are a lot of things lined up, and some of it we are still guessing or have very little information as to when the release might come.


Please note that the following is simply my own thoughts to a release schedule. No rumors on this one, and the intent is to discuss it the possibilities of what is on the horizon with the community.

Tau (April Release, or April pre-orders)
Tau are very much next. There are just too many different sources all saying the same thing, not to mention that Hastings word is canon, and he claimed they were next for us now back in August of last year.

So when? It looks like April is the month. I am not going to guess on whether that is only a few weeks away (although it sure feels like it) for an April 6th release date, or if April is going to be for pre-orders.


Summer 2013 (Allied Supplement, Apocalypse)
I am thinking that on the 40k side of things we will be seeing a small break for 40k until summer. I am a little concerned that its been awhile since we have heard much of an allied supplement, so perhaps this is not going to happen. An Apocalypse supplement definitely seems to coming summer from rumors.


Eldar (Q3 or 4)
Even though this is scheduled far enough out, I am hoping that it falls into the third quarter. I am still dying to get more information on the Eldar release, as I am going to predict that the eldar codex will by far be the most beautiful release of the year. I am excited to see it, and how its units play out.

2014 (Orks and Tyranids)
While no other codex seems to be lined up for a 2013 release past Eldar, Orks and Tyranids seem to be on the list for an early release for 2014.

Lately we have been seeing a lot of Tyranid information, which has caught me off guard, since I had thought Orks would be before Tyranids according to whispers, but its too early to tell at the moment.

Other Releases
There has been rumors of a Greater Daemon model release sometime around summer, perhaps tied  into or around one of the above mentioned supplements. So I am still hopeful to see new models for these beasts.

Dark Eldar Voidraven. I am really wanting this model to come out. The Voidraven has one of the best guns in the game (void lance), and it is one that I want to field sometime in the near future, but am waiting for a release. There has been nothing really reliable as to a date this model's release, that has supposedly been done for a long time now.

Other concerns or Codices in the Works?
Black Templar have been rumored for a long time now with nothing really reliable. Space Marines still need a 6th edition codex, but little has been whispered. Other than this, we have very little info past Hastings release line up.