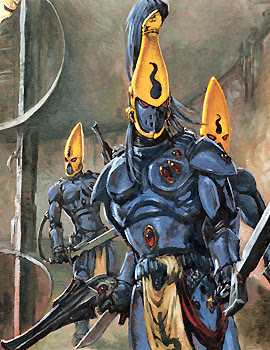 Hopefully this is just the beginning of Eldar rumors, but we have a nice jump on what is going on in the rules section of how Eldar are being developed. This of course is exciting to me, as I just got an Eldar army, and we have had rumors (via Hastings) that we will be seeing them later this year.


Take a look, but remember that these are rumors, and it sounds like rules are still be hammered out right now. So if you can, comment on what you read here, after all you never know who is watching.

via an Anonymous Source from the Faeit 212 inbox
Just read your report with your new elder army.

- Autarchs take Paths. These represent completed paths they have walked and are tied to the various aspects. By taking a path you make the respective aspect warrior a troop choice (the exception are reapers who just become scoring)

- Overall point cost reduction (guardians see it the most, aspect warriors see it the least, but are instead a fair margin better with only a minor cost decrease for two of the schools).

- new special rule that influence how howling banshees interact in combat. It's current iteration really makes them feel like glass cannons that are amazing at what they're designed to do.

-Seer councils have brotherhood of psykers (the farseers still cast their own abilities in addition, but two farseers together cast more than 2 farseers separately)

- in general, aspect warriors are hyper focused and hyper successful if used properly
- No new aspect
- 2 new flyers
- lots of units get access to skyfire
- new tank (on falcon chasis)
- Avatar is buffed a lot
- Two new special characters
- exarchs are all really good in duels in different ways
- farseers are still awesome psykers
- warlocks improve deny the witch.
- falcon/wave serpent point reduction
- way to make some of the craftworld specific lists
- additional rules for allying with dark eldar
- expanded fluff on the war in heaven