The Definitive Answer About What Is Going On At Forgeworld 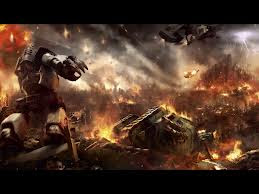 While a lot of Daemons are being discussed, its time for a brief break, as we get to the bottom of exactly what is going on over at Forgeworld regarding a move to going more mainstream. This is very detailed, and should answer most of the questions we have had over the last 6 months or so on the issue.


There are many people that would like to see Forgeworld go more maintstream, and be more accepted in the standard 40k game. While there are a few rules issues with it, Forgeworld models have in general become more balanced to use in games, despite the consistent attitude that they are not among long time gamers that have been around for a decade or more when rules were much different.

A huge thanks goes out to our source, for giving us this information and allowing it to be posted.


viaAnonymous Source (from the Faeit 212 inbox)
Forgeworld has recently begun experimenting with some new casting methods. The tartarus terminators for instance were originally injection molded.

Due to quality, however Forgeworld returned to it's normal production methods shortly there after.

The clam shells are identical to the new GW blisters, but thats just because of a change in supply chain for packaging.

At this time there is zero intention to stick Forgeworld in retail stores.

Unlike GW, Forgeworld actually maintains a surprisingly low shelf stock of their miniatures. While very few are cast to order, Forgeworld maintains a weekly schedule for production based on the previous week's sales.

Forgeworld resin cannot be melted and reused so any unsold product is garbage.

As such, for Forgeworld to put even just 1 package of only their popular kits in every store it would still be 100x or more than their current inventory.

Also, conversations on this topic in the past have concluded that Forgeworld packaging would need to be improved to match the GW standard, which means photographers, graphic artists and more importantly: costs.

Furthermore, while this is in part due to the nature of how Forgeworld can currently be acquired, most purchases are large. Entire armies, etc. Thus, the sales pattern does not fit the retail environment. Admittedly this would change somewhat as there are for certain people who would buy just 1 kit if it were in store who currently buy nothing due to shipping costs and time.

Lastly, in terms of new (currently untapped) revenue it would not generate much if any. Predictions show that it would just redirect some funds from GW plastic to FW resin in some situations.

That isn't to say that GW isn't acutely aware of the demand for Forgeworld. Especially now with the Heresy being fleshed out.

There is a strong push for Forgeworld to be available in stores as Direct Order, without shipping or duty fees and presumably taking a fraction of the time.

What is holding that back is just the legal limitations. Someone has to pay the duty, and it is not predictable or consistent enough to factor into the cost of the models.

To get around that, the miniatures would have to be produced in the same country they're being sold in, or a neighboring nation with a free trade agreement.

Sadly though, when it comes to north America, if something is made in the USA or Canada, you can't also import it (as the same company). Meaning if Forgeworld set up shop in Tennessee it would be the only place to get Forgeworld in north America.

Currently there just isn't enough demand in either America or Europe to split the supply like that.