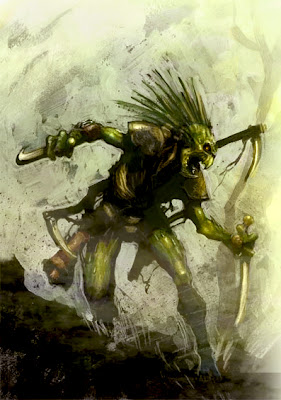 Another set of rumors coming from the Bols Lounge this morning for Tau. Inside you will find an approximate date to the timeframe for the playtest rules we have been seeing and more.

via Stickmonkey on Bols Lounge
The information I recently provided BigRed comes from a late 2012 playtest, I believe Oct or Nov timeframe.

The psychic defense boost I mentioned was described as Tau are just harder to target with warp powers, they have very little presence in the warp. I asked my source more on this, and he said during playtest all Tau got a DtW reroll. Tau in Suits got a 5+ DtW.

The Kroot monster is very cool looking, but I fear rules wise its going to suffer from Pyrovore syndrome. Its expensive, and shortlived. A beast in CC, but it's hard to get it there. Roughly the size of a Maulerfiend, its like a hybrid between the Krootox and the Great Knarloc. Beaked head. 4legged. Over muscled. Kinda apelike pose and body structure.

The "uber-suit" is NOT at all like a wraithlord. It is not suited for CC, and really cant be outfitted for that role. Last I saw the T was only 7, but others are saying it is T8. I was talking about it with my source earlier and he made mention of the plasma weapon having ignore cover and thinking it will be the load out of choice. He felt that it was very balanced points to capability wise for its role in the codex. Visual wise it is definitely in line with the battle suit. Reminds me a lot of the old BattleTech line merged with Tau aesthetic.

Profile I saw was WS3 BS5 S5 T7 W3 I3 A2 L8, again a lot of noise with differing statlines, so the final stats wont be known until we see the book..

I don't think the Vespid Scooter made the cut. It was in a number of early drafts, kind of like the genosian fighters in Star Wars. Yes, flying creatures with a flying vehicle... Named after a famous motorized bike.... 80s GW may have done this, not 10s.