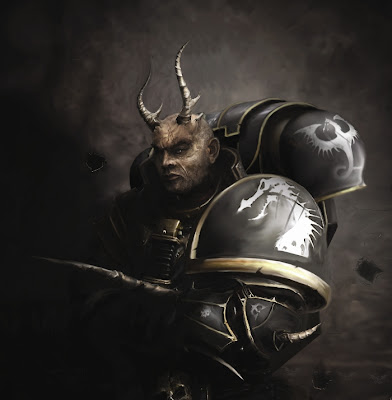 The Black Dragons sound very intriguing, and definitely draw interest with the artwork shown above. The Death of Antagonis is a new space marine novel that is currently up for pre-order.

THE ART OF ANTAGONIS
The Black Dragons date from the so-called ‘Cursed Founding’ of Space Marines and this has left its mark on these loyal sons of the Emperor. Literally. Twisted horns and vicious bone spikes protrude from their bodies, but these Space Marines have learned to adapt what others may consider heretical mutations into tools for dispensing Imperial justice.

David Annandale’s new Space Marine Battles novel, The Death of Antagonis, highlights the duality of this Chapter. Even as they struggle valiantly to rid a world of an insidious Chaos taint, wading knee-deep in the bodies of fallen cultists and plague victims, they are constantly under the suspicious gaze of the Inquisition and the Adepta Sororitas, desperate to prove that some taint exists among the Chapter.

As with all Space Marine Battles novels, The Death of Antagonis contains a full colour map section and some evocative art pieces. In this particular case, Rhys Pugh has done some fantastic work portraying these fearsome warriors. You can see why there might be some doubt about their loyalty, mind you.


The tattoos and scars on their arms hint at the less than salubrious backgrounds these warriors may have had before their indoctrination into the Adeptus Astartes. The terrifying mutations that their enhancement has wracked on their bodies have become almost a badge of honour for these Space Marines, and they now modify their armour to allow them to use these retractable blades in combat.


The Death of Antagonis is available to pre-order now. Order today and be among the first to read this brand new novel.