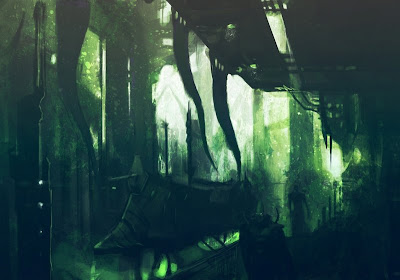 I started playing Warhammer 40k back at the onset of 3rd edition. Dark Eldar models were in easy supply, and personally I liked the just evilness of them at the onset. There is no other race that is just seeped in evil like Dark Eldar. So Dark Eldar were my first army, and because of that, I will always like them. That being said, I am moving away from my Grey Knights and Imperial Guard hordes, and digging deeply into my dark eldar now.

I tend to get a lot of requests for my old Dark Eldar Tactica to be updated with 6th edition, so here is the first bit, the overview and what I think of the army. Later I will start getting into some very specifics and addressing units and tactics.

Dark Eldar is a competitive army. It is not a top tier codex. Why?
Dark Eldar are competitive in that they can literally rip apart another army on the tabletop (vs highly competitive lists). The problem of the codex in the tournament scenario is that it is not a balanced army, nor can it be and still remain competitive. By this I mean, it does not and will not handle all comers very well. yes of course we do our best to do what we can on it, but there is no give in the army. Meaning, you come up against your Rock/paper/scissors list, one or two things go wrong (including a few dice rolls) the battle can be over.

This is why people often see the Dark Eldar succeeding, and winning games, but they do not hold their own in a tournament unless the draw is in their favor. Most codices across the board in 40k are able to build lists that are very well balanced and able to take on whatever you might find in your tournament games, and in 6th edition, when they are not able to..... there are allies that can make up that difference. Dark Eldar do not have these in abundance (a lot of desperate allies), and with the exception of Eldar, allies tend to hurt the dark eldar more than benefit them. There are a few tricks though out there amongst other armies that can work, but for the most part, Dark Eldar need to be Dark Eldar (or with eldar).

Later this year, if we see an Eldar codex released, a lot of things will change for our Dark Kin, with lots of new possibilities.

Dark Eldar are not for the faint of heart. They have one of the most beautiful model ranges in the game, and are by far one of the most difficult to play (well). I have seen and read almost every Dark Eldar tactica out there, and enjoy reading them, but there are too many of them declaring the army to be stronger than they really are.

Besides what is mentioned above:
There are too many units that are broke in the codex. Meaning they do not work. While I say they are broke, it is possible to build a list around them to force them to have marginal and occasionally good effects on the game, but these units in general seem to have rules that just did not work out (which is too bad, some of these are beautiful models). Here are some examples:
*Mandrakes
*Dais of Destruction
*Kheradruakh the Decapitator
*The Court of the Archon

And then some very marginal units
*Succubus
*Talos
*Cronos

And then we have the vehicles and characters. Of course there are the Harlequins as well, but the codex is not as complex as many people think it is. To play in the competitive environment, your options are not as vast and complex the codex first appears. Dark Eldar units are rather expensive. Building a Dark Eldar list comes down to hard choices to fit your army into the point cost of the game.