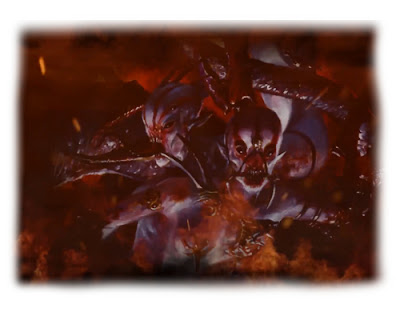 The White Dwarf is basically out now, and rules are being gleaned from it and the battle report therein as we speak. Here is the latest information on the latest Codex Chaos Daemons.

via TastyTaste on Blood of Kittens
As it turns out there is some valuable rules information from the GW Battle Report here is a quick run down of those insights.

*Deamons of special rules are the same as the ones found on the Deamon Princes in Chaos Space Marine codex
*Burning Chariot of Tzeentch has Torrent AP3 Flamers along with second mode with high strength for vehicle killing.
*The Skull Cannon of Khorne is Large Blast S8 AP4 or 36" range
*Standard Deployment is back for Deamons along with normal Deep Strike
*Plague Drones have upgrades to get 3+ along with at least Strength 4
*Daemonic Rewards random chart three tiers (50 pts to roll)
*Herald Loci buffing powers for same god units (Icons of Deamons)
*Psychic Powers
*All Heralds (minus Khorne) can be psykers and you still can take two for one per HQ
*Warp Storm random (2d6) powers that effect Deamons every turn of the game.
*Tzeentch Gets Divination (HUGE)!
*Soul Grinder has Skyfire

Those are the big ones I could gather I know others on the net have posted their own lists from the White Dwarf.
If you want a closer look at some of the Deamonic Rewards here is a pic. 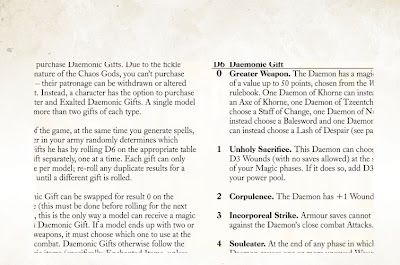