World Eater Rampagers Up for Pre-Order 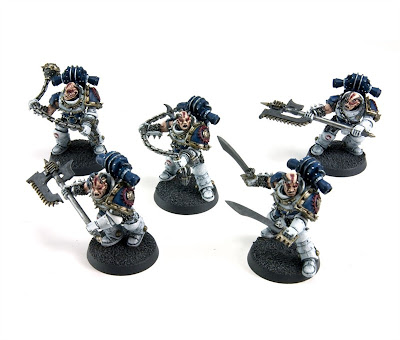 In this weeks Forgeworld newsletter we are getting the World Eaters Legion Rampager Squads. Not only are these blood thirsty marines up for release, there are a number of shoulder pads being released.


I really like the various weapon layouts in this set. It looks like there is enough variety in the models, rather just giving us 5 marines with chain axes.

The Rampager squads of the World Eaters were formed of the most savage and bloodthirsty Space Marines in a Legion already notorious for its fury in battle. All underwent the prohibited psycho-surgery that Angron is believed to have instigated among his favoured sons. Those who survived honed their newly enhanced desire for berserk slaughter through martial discipline and the mastery of cruel and vicious weapons adapted from the arena combats in which the Red Angel fought during his youth.
Of those World Eaters who were plunged too far into madness by their Legion’s experiments, little is known, but dark rumours whisper that they now form the ranks of the Caedere, or ‘butchers’; a dark foreshadowing of the red-handed future of the XIIth Legion.
Designed by Mark Bedford and Will Hayes, the World Eaters Legion Rampager Squadcontains five complete multi-part resin models, which are packed with Legion-specific detail. Each member of the squad is presented helmetless in order to show the surgical implants the Rampagers received, and the kit also contains a meteor hammer, two Excoriator chainaxes, a barb-hook lash and a pair of Falax blades; all weapons unique to the World Eaters Legion that can also be used to build XIIth Legion characters.
Legion Phobos Pattern Chainaxes
Less common a sight than the ubiquitous chainsword, the chainaxe was used almost wholesale by the World Eaters Legion, its savage nature and brutal appearance a match for their merciless style of warfare.
Designed by Will Hayes, the Phobos Pattern Chainaxe set contains five Phobos-pattern chainaxes and five bolt pistols. It is fully compatible with ourPower Armour mark sets models, and is perfect for portraying the ferocious warriors of Angron’s Legion.
Legion Shoulder Pad Sets
Keith Robertson has been busy designing sets of World Eaters, Death Guard, Sons of Horus and Emperor’s Children Legion MkIII shoulder pads, as well as a set of Death Guard Legion Cataphractii Shoulder Pads. Each pack contains ten resin shoulder pads featuring Legion-specific iconography.
All of these fantastic new releases are available to pre-order now for despatch week commencing the 1st of March.
2/08/2013
Natfka
Announcements, Forgeworld, News Headlines