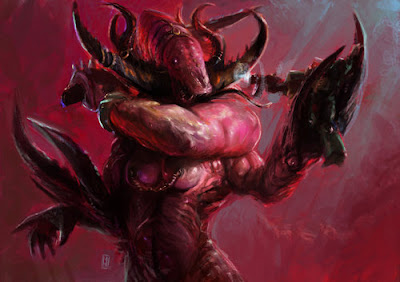 Daemonic Instability is coming. A lot of players are very worried about exactly what daemonic instability will be, and a lot of us, like myself do not know that currently there is daemonic instability on the fantasy side of things. So here is a what I could dig up about how it works currently, so that we can get an idea on maybe how it will be working when the new codex/army book is released.


Daemonic Instability (from the now old Daemons of Chaos Army Book)
1. Calculate combat resolution as normal and roll 2d6
2. Compare the dice roll to the Daemons leadership value, taking into account any modifiers for combat resolution. For each point the unit fails its instability tset by, the unit suffers one additional wound. No saves of any kind are allowed against these wounds.

While I expect that this is not exactly how it will play out in the new books for either Fantasy or 40k, perhaps it will give us an idea of what to expect in 40k. Anything anyone knows and wants to add to this, please do so below.