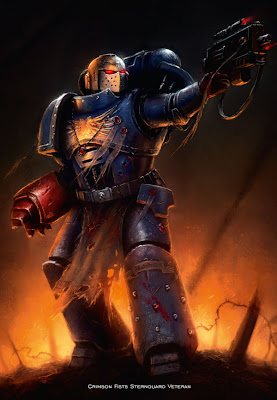 Also something new, is that this book will not be available from blacklibrary.com. Read ahead to get the details. 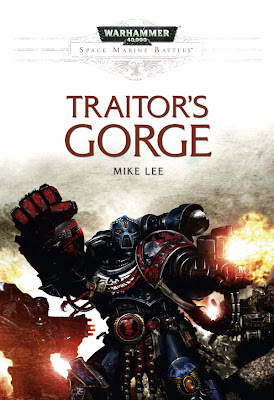 The book is a hardback novella, complete with hardcover in the colours of the Crimson Fists Chapter, a dustjacket featuring cover artwork by Clint Langley, and a colour section containing everything you’d expect from a Space Marine Battles title, including a campaign map and beautiful character portraits by Sam Lamont. Not only that, but each copy is numbered and we’re only printing 1,000. And with the story being exclusive to this format for at least a year, this is a seriously collectable artefact.

Packed with action, Traitor’s Gorge sheds new light on a piece of lore from Codex: Space Marines. Here’s what it’s about:

It has been half a year since the Crimson Fists were laid low by the invasion of their home world and the loss of their fortress-monastery. In that time, Chapter Master Pedro Kantor has led his battle-brothers in the fight to reclaim their planet from the greenskin menace that plagues them still.

On a mission to wipe a pocket of aliens in the Jaden Mountains, Kantor and his small band of warriors find that the orks have gathered around an influential leader and are greater in number than the beleaguered Space Marines could ever have imagined. Vastly outnumbered and surrounded by the foe, the Crimson Fists prepare to sell their lives dearly in the name of their world, their primarch and their Chapter.