Home » Announcements » News Headlines » Spots the Space Marine is Back UP

Spots the Space Marine is Back UP 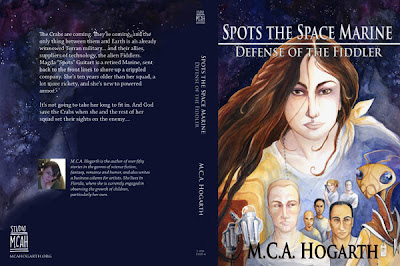 Thanks to Rob Scott for pointing out the following post through the EFF, as I had not seen it yet.

EFF to the rescue!
Trademark Bully Thwarted: Spots the Space Marine Back Online
Score one for the space marines.

After it received the complaint, Amazon promptly removed the book from its virtual shelves.  When the author, M.C.A Hogarth, protested, Amazon initially refused to reinstate the book and instead politely suggested she resolve the dispute directly with Games Workshop.

Hogarth was understandably shocked. As many folks pointed out, “space marine” dates back to at least the 1930s, appearing in a variety of science fiction including works by Robert Heinlein. It is a science fiction icon. So the notion that any single entity, much less a gaming company, could have broad rights in the “space marine” is outrageous.

Hogarth tried to resolve the dispute in a friendly way, but Games Workshop refused to withdraw its complaint. So she reached out for help, including to EFF (and thanks to the many folks, including Wil Wheaton, Popehat, and Cory Doctorow, who helped spread the word). We were able to intervene and, to Amazon’s credit, the company reviewed the claim and restored the book. Let’s hope Games Workshop will now have the good sense to realize the bullying has to stop.

We’re pleased that Amazon did the right thing here, and that we were able to help. And we’re also pleased that so many internet users got involved to support Ms. Hogarth. Together, we sent a signal: Trademark bullies will not be tolerated online.

But the work is not yet done: this is just one instance of a much bigger “weakest link” problem that imperils online speech and commerce.  Offline, most legal users can ignore improper trademark threats, because the bullies will probably have the good sense not to test the matter in court and have little recourse through third parties. In the Internet context, however, individuals and organizations rely on service providers to help them communicate with the world and sell their products and services (YouTube, Facebook, eBay, Amazon.com, etc.). A trademark complaint directed to one of those third-party providers can mean a fast and easy takedown – as it did here.  After all, those providers usually don’t have the resources and/or the inclination to investigate trademark infringement claims – they’d rather stay “neutral.” As a result, a “neutral” provider generally means “you lose” to people facing bogus trademark claims.  Moreover, because there is no counter-notice procedure, the targets of an improper takedown have no easy way to get their content back up even if they chose to fight.

This bigger problem is not going away anytime soon.  Users, let’s keep standing up to trademark bullies, and helping others do so, too.  Intermediaries: take a page from Amazon here, and take the time to help your customers protect themselves.  An easy first step is to make sure your trademark takedown policies include easy-to-use counter-notice procedures.


The Return of Spots the Space Marine
Here is what was posted by Maggie on her blog
http://mcahogarth.org/?p=10661

Posted by mcah on February 8, 2013 Leave a comment (15)Go to comments
Last night many of you alerted me to the reappearance of the e-book edition of Spots the Space Marine on Amazon. I hope you’ll join me in applauding Amazon’s decision to reinstate the book. Amazon and other major retailers have given me wonderful opportunities as an independent author, not just in e-books but in print and audiobooks. The stories I’ve sold to magazines launched my writing career but it’s the sales I make from these outlets that allow me to buy food for my family.

I cannot say enough good things about the Electronic Frontier Foundation, who have been enthusiastic, supportive and productive. They pursued my case with passion and principle and are standing by should any more developments necessitate their aid. Many of you have asked if you can help me pay my legal costs; I would encourage you to donate to the EFF to help support their good work.

At this point my defense is done unless legal action develops in response to the reinstatement of Spots. But this is one small battle in a long war, and we must continue to protect common terms by refusing to reshape our creations to placate over-zealous legal teams. If you’ve run afoul of this sort of behavior, you are not alone, and help is out there. My experience proves it.

I continue to be gravely concerned by the lack of due process shown me. There’s a tradition of facing one’s accuser, and one of the worst parts of this ordeal was having no petition, no appeal, no right to defend myself and point out the absurdity of the claim against me. It seems that some may take advantage of this for a cheap legal ride, damaging someone’s income and reputation simply by firing off an email. This is wrong and nothing about Spots’ outcome will prevent it from happening again. I’m not sure how a change in that process might be effected, but until that happens we’ll have to continue to stand together.

On a personal note, I want to tell you what an unbelievable few days it’s been. When I first received the take-down notice from Amazon, I was stunned—a single email seemed to imbue the world with a formless menace. For most of two months I’ve been walking with hunched shoulders, fighting a sort of numb disbelief. When I made my post on Tuesday I didn’t know what to expect and was on the verge of surrender. What happened instead has reaffirmed my faith in the benevolence and decency of people everywhere.

I tell my daughter that there’s magic in the world and that human beings are responsible for creating it. You all have proved that decisively. I’ll never forget the past few days, and for that I and my family thank you earnestly from the depths of our hearts.