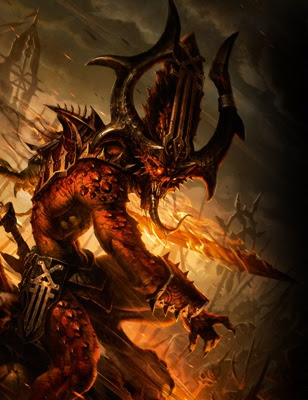 The bits of rules we have been getting today were in German, and now we have an even clearer translation from one of our readers here. I thought I would share this before we move on to more information.


German Rumor Translation thanks to Oliver
A more accurate translation:

Daemons
Daemon belong to a specific god and have USR Hatred for their opposing god (Nurgle/Tzeentch, Khorne/Slaanesh). Herald of one god cannot join a unit from another god.

Daemonic Instability
Units with this USR may not be joined by units without this USR. Unit passes all Fear, Pinning and Moral tests. If a Unit with this USR looses in Close Combat, it must test for Instability on 2D6.

If the test is failed, the Unit takes wounds equal to the difference between its LD value and the roll.

If you roll Double 1, all wounds lost in this combat are restored. Place lost models back on the table

If you roll Double 6, the whole unit is removed from play.

4) Warp Quake: All models with the Daemon USR suffer a -1 penalty to their saves until the next roll on this chart (friend or foe)

5) Storm of Fire: Roll a D6 for every unit with the Daemon of Nurgle USR or Mark of Nurgle or enemy unit that is not locked in combat. On a roll of 6, place a large blast marker on one of the models in the unit. Scatter 2D6. All models under the template suffer a S4 AP5 Ignore Cover, Pinning hit ).

6) Glorious Rot: Roll a D6 for every unit with the Daemon of Tzeentch or Mark of Tzeentch or enemy unit not locked in combat. On a roll of a 6, the unit suffers D6 S4 AP3 Poison (4+) hits. Vehicles are hit on Side Armor.

8) The Dark Prince Thirsts: Roll a D6 for every unit with the Daemon of Khorne USR or Mark of Khorne or enemy unit that is not locked in combat. On a roll of 6, the unit suffers D6 S6 AP- Ignore Cover, Rending hits.

9) Khornes Rage: Roll a D6 for every unit with the Daemon of Slaanesh USR or Mark of Slaanesh or enemy unit that is not locked in combat. On a roll of 6, center a small blast marker on a model of your choice in the unit and scatter 2D6. Models under the blast template suffer a S8 AP 3 Pinning hit.

10) Warp Flood: All units with the Daemon USR gain +1 to all saving throws until the next roll on the Warp Storm Table (friend or foe)

11) Daemonic Possesion: A random enemy non-vehicle .Psyker that is not a daemon must pass a Leadership test on 3D6. If the test is failed, the Psyker is removed from play. Place a Herald of a god of your choice within 6" of the removed model. The Herald does not receive any upgrades.

12) Blessing of the Warp: A new unit of 2D6+3 Bloodletters, Pink Horrors, Daemonetts or Plaguebearers (your choice) arrives via deep strike.

All Daemons have a 6+ Armor Save. Some daemons (for example Bloodthirster have a 3+)

Skulltaker has EW and 3+ Armor

Lord Of Change is Level 2 Psyker and Flying FMC

Blue Scribes are not Psykers, but generate one power each turn from the main rule book. They can use that power without rolling a psykic test.

The Changeling may exchange any of his stats with an enemy non-vehicle model stat in base contact (WS, S, W, I, A) until the end of the turn

Great Unclean One is Psyker Level 1, Biomancy and Nurgle

Beasts of Nurgle can charge in the opponents turn.

The Mask re-rolls all failed saves. It has multiple different dances

There are Chaos Furies

Flamers of Tzeench: If they caused a wound, take a test every turn for that unit. If the test is failed, you take D3 wounds, if you pass the test, you gain FNP (6+)

Skull Cannon: If you assault a unit that has been hit by a shot from the Skull Cannon, you suffer no initiative penalty for assaulting thru difficult terrain.

Axe of Khorne: Instant Death on a roll of 6 to wound.

Mutated Warpknife (Tzeentch): If it kills a enemy Character or MC, that model is turned into a Chaos Spawn on a roll of 2+

Warp Poisoning: If a Character or MC looses its last wound due to a Close Combat attack from the Staff of Change, all units within D6 inches (friend and foe) suffer D6 hits at S5 AP -

Many Characters cannot buy equipment, but can buy Minor, Major and Legendary enhancements for a certain point cost. These are randomly determined at the same time as Warlord Traits are rolled. You may have the same enhancements more than once on each character, but the random result can only be applied once to each character. Re-roll doubles. Rolls can be exchanged for special weapons.

Heralds may still be taken 2 per HQ slot. Every Herald adds a Boon to the unit he joins.

Icons can improve certain effects. Instruments can "summon" reserves or modify the result of the Warp Storm Table.