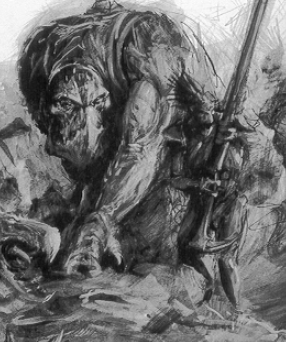 Even more Tau playtest rumors have come across my desk late in the night, and I thought I would get these out right away. There is a small line or two that I removed, and it seemed to indicate that a deadline of sorts was very near or already had arrived for playtesting material.


Please remember that these are playtesting rumors. Playtesting gives us insight to what is being worked on, but not exact details in how things will look in the codex once released.

implosion: if you score a explosion on a tank/flyer then it explodes 2d6 inches instead of the normal d6.


The new big kroot model is actually the krootox giant, from what I have been told fluff points to the tau making the krootox genetics being advance and in doing this increasing the size, strength and toughness.

the krootox giant has the following rules and stats - these I believe will change as we have had much discussions upon this unit and cannot be certain if it is powerful enough for a competitive environment.

mental without control: If your krootox giant loses his krootox rider then the Giant must pass a leadership test every turn otherwise will attack the closest enemy unit. If the Giant cannot reach a target then it misses it next turn while it cools down.

this unit at the moment costs : 200pts & can upgrade it's armour save to 3+ with a piece of war gear from the kroot armoury