This is Our Hobby: 33% Chance of Failure 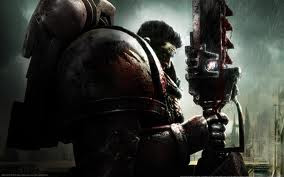 Recently, in a trip overseas I visited a local hobby centre were a number of gamers were playing. Going against what many say is the current meta (in Australia), Codex: Space Marines was by  far the most popular army of choice.


In conversation with these guys, they told me that Necron flyer spam and other meta builds held no interest for them. This got me thinking as to how the fluff in the game can change the hobby. It led me to consider what collectors and hobbyists see when they pick up a model and decide to collect an army. Obviously for some, choosing an army is about what can currently be used to utterly destroy an opponent, but for many, it is based upon what we can connect with on a day to day bases. While there are a number of different paths this connection can occur, the simple allocation of an armour save can change how we feel about an army.

Armour saves are one of our hobby's most identifiable factors. A 3+ you say? Most likely a marine variant of some sort. 4+ or worse? Everything else. Of course there are exceptions to this rule (such as Striking Scorpions or Tau Crisis suits) but it is fairly standard procedure to expect good saves from humanities finest and bad saves from humanities enemies.

Xenos armies suffer heavily from the wrath of template weapons or from what I like to call "wooden army lists" simply because they die in droves from a single flamer.

I read a lot of comments about Games Workshop only making codex's of marine variants good because "Space Marines are the top selling miniatures." Well there is a good reason for this. A 3+ armour save does not only represent a 2/3 chance of saving a wound, it represents human endurance at an all mighty level. With much of the 40k fluff revolving around the Imperium, the save represents what many of us come to expect of humanities superhuman soldiers: bravery, honour and sacrifice. Soldiers who will endure whatever is thrown at them in the stand against evil.

No matter what you collect, be it Tau, Orks or even Tyranids, we still hold a fascination with superhuman soldiers charging stoically across the battlefield. When introducing younger players to the hobby, a un-killable super soldier is by far the best starting point. Games Workshop is a business, and like many businesses, need to sell models to keep our hobby going. I myself collect Dark Eldar, and after many a loss to flamers, sometimes consider about throwing it all in and starting a marine army. Except at the end of the day I don't want to. While my armour saves may be as fragile as a piece of cardboard, my connection to the army keeps me going. So what, if anything, keeps you connected to an army?

My name is CrAzY424 and I have been in the hobby for a good ten years. This is my first article, but look forward to writing more. Cheers!