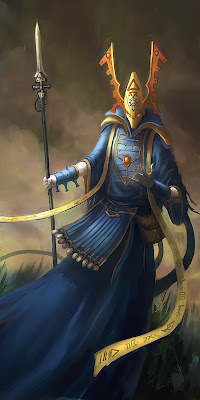 This week Daemons were revealed, and Chaos Daemons as we know them are on their last few final days.


Chaos Daemons
It seems almost a rarity nowadays that I do not see screamers and flamers in a game. I would by far say they are the most common army in my circles. Not just because Daemons are what people are playing, but because Chaos Marine players are also utilizing them as much as possible. Out of my last 4 games, 3 had a large number of screamers and flamers.

I will have to admit, that the only reason I have never liked Daemons is because of their deployment. I just have never liked it all that much, from choosing what army I wanted to play, to playing against them.

Even though Daemons are not my style of play (at least currently), I do appreciate variety on the tabletop. So I have extremely high hopes for this next codex release.

Without really knowing what is going on in the next codex, I will be holding any preconceived notions I might have of what I have learned until that beast is in my hands.

As for the look of the daemons. As a friend of mine that paints professionally said recently to me, there are two primary styles of painting.... the more comic style of more solid bright colors, and the more realistic approach. Now that I have seen the models, I want to see someone paint these with a much more realistic paint scheme. After all I want my daemons down and dirty.

Craftworld Eldar
When I first started playing Warhammer 40k back at the onset of 3rd edition, I ended up getting a lot of Dark Eldar Warriors cheaply, since they were the army opposite Space Marines in the starter set. So that is how I first got into the Dark Eldar. It was practical, and there is nothing more evil and sinister than those Dark Kin.

So back to the point I was going to make. When I first got into the game, it seemed that it took the best generals and the best hobbyists to collect and play Eldar. I always had it in my thoughts that one day, when I learn to paint, that I will dedicate myself to getting an eldar army. It looks like that day has finally arrived. Through some finagling (trading and selling some other stuff), I have managed to acquire an eldar army.

No idea on how many points are involved, but its several thousand points, estimated somewhere in the range of  8000pts. With this acquisition, alongside my large Dark Eldar force, I feel I am ready for any upcoming Eldar codex release, and of course to pair up with my Dark Eldar as needed.

Dark Eldar
So obviously Dark Eldar have been on my mind a lot lately, and I have been getting in more games with them. I believe its been three games in the last week. I have been running a harly death star in the last couple games, and found them to be a ton of fun.

What I have been doing is running raider escorts (to limit shots, create cover, and limit incoming flame and other templates that could damage my unit prematurely. It has been very effective in the last two games, and when combined with a large raider/ ravager force and trueborn splinter cannon squads (an amazing deal at 56pts each), it makes for a deadly combination list.