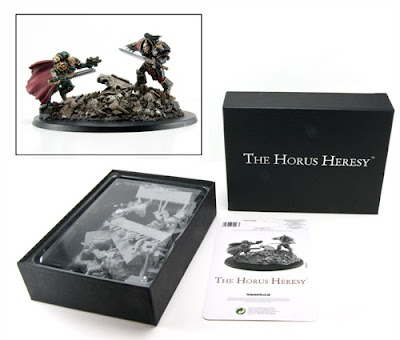 New from Forgeworld is a release nothing short of incredible. Abaddon and Lokken are here, dispay box and all. Don't forget to check out the video at the bottom of the page., 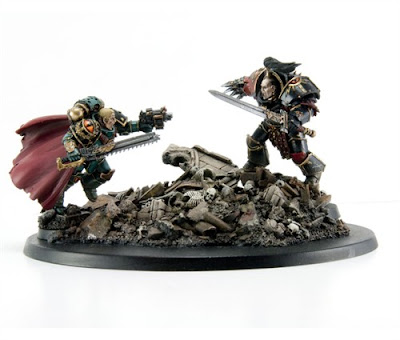 Abaddon and Loken
Ezekyle Abaddon, First Captain of the Sons of Horus and Master of the Justaerin, was one of the most renowned and fanatically loyal commanders of the XVIth Legion. A hulking brute of a Space Marine, whispered rumour had long speculated that he was the clone-progeny of the Warmaster himself. Regardless, Abaddon walked willingly into treachery alongside his master, slaughtering many of his former comrades on the blasted fields of Isstvan III, and soon his name was amongst the most feared and despised of the traitor Horus’ followers.

Garviel Loken once commanded the 10th Company of the Luna Wolves Legion; later the Sons of Horus. He was a well-respected and senior commander, and one of the Mournival, the unofficial cadre of Horus’ closest advisors. His idealism and staunch loyalty to the Emperor and Humanity saw him selected to command the Sons of Horus contingent in the assault against the recidivists of Isstvan III. When the true scope of betrayal was revealed, Loken and his comrades cast aside their Legion name and proclaimed themselves Luna Wolves once more. They exacted a heavy toll on those they had once called brother, but it was as the Last Captain of the Luna Wolves that Garviel Loken fell.

This very special pair of models are supplied in a particularly handsome presentation box, just like Angron, and Abaddon and Loken are multi-part resin models, each packed with Legion-specific iconography. Each is dynamically posed and supplied on 40mm and 20mm bases respectively for gaming purposes. The figures also slot into a large scenic base to allow the fateful duel between the two to be represented.

Simon Egan has designed two stunningly detailed figures to depict these two most famous commanders of the Sons of Horus Legion. Loken is charging forward, his hatred of the traitors writ clear upon his features, while Abaddon is braced to receive his former brother’s assault, the Eye of Horus having replaced all Imperial iconography upon his armour. Abaddon is additionally supplied with two weapon options: an ornate power sword and the combi-bolter that his wargear includes for normal battlefield use.

The Abaddon and Loken set is available to pre-order now for despatch from Friday 1st March.