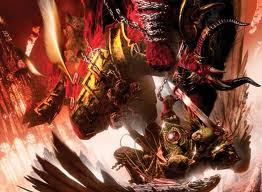 Earlier today we had details arrive on the upcoming Chaos Daemons codex that is due for pre-orders on the 23rd of this month. Now we have some rumor bits featuring the Blood Thirster, Great Unclean one, Bloodletter, and Daemonettes.


Please remember that these are still rumors until we get the codex in our hands. However we are getting close, so I would assume we are getting more defined information.

via Matt (not his real name) from the Faeit 212 inbox
Now that GW have released their teaser trailer I can give you the big scoop of information I have been holding. This information has only been told to a view of us and you must realise that is why we had to wait for GW to make their move. So this is what I know in the way of rules, stats and points - their is a view upgrades but nothing to amazing.

blood without end- the bloodthirsters gain +d6 attacks on the charge and makes another strike at initiative step 1 for every wound he causes.
These extra strikes do not produce any further strikes.

my master gifts all - pick an enemy and friendly unit at the beginning of the game. The enemy unit gains -1 toughness and strength while a friendly plaguebearers count as +1 strength and +1 to there feel no pain rolls.


Wargear:
tzeench gift of betrayal -50pts (one use)
pick an enemy independent character at random, that model or unit must pass a leadership test with a -4 penalty or be removed  after being sucked into the warp for tzeench amusement, models from codex: space marine, dark angels,black templars,grey knights,space wolves,blood angels take a -2 penalty instead to represent their resistance from the dark gods temptations.

nurgle's blessing (30pts)
pick a nurgle unit in your army, that model/unit gains +1 to their feel no pain roll.

sword of a thousand souls: 45pts
the bearer must charge every enemy unit and must challenge but gain +2d6 extra attacks on the charge.

dance of death: 40pts
pick an enemy unit at the beginning of the game, that unit must roll a initiative test every turn of the game or is under the control of the daemon player. The unit under control may charge friendly models but cannot move off the board or into any piece of terrain that can cause hard to the model. If the enemy passes the initiative test more than three times during the battle then the dance has been removed for the remainder of the game.