Presence of Faeit: Death From the Skies 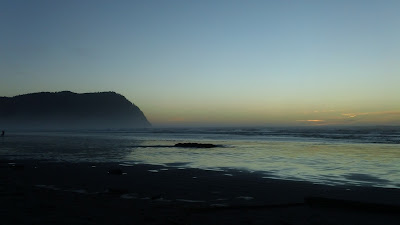 There is a lot that on the table after this weeks rumors, including a new flyer supplement or compendium that seemed to be the primary topic of the week (of course beyond Warriors of Chaos).

This last week was seemed very busy, and I spent a lot of it working on some Dark Age models. Then Saturday it was off to the GW store opening, and from there a run to the beach, where I am now. For those of you that have never seen the Oregon Coastline, I posted the pic above. Its not often I get to head out of town, even for a short little bit, so it has been a nice reprieve.

Death From the Skies
There is quite a bit of words going around on whether this supplement is worth it. On first impressions it seems like it is simply an update that could of been handled through an FAQ. While that might be true, I was trying to calculate what 72pages could hold from what information we have. I think there must be something else in there, or a model wave (even small) that will follow.

Its hard to tell, and I do wish that there is something significant in the compendium. Even if there is not, it will be something that I will pick up. Mostly because it seems that our flyer rules are rather disjointed right now, spread out everywhere between faqs etc.

What I am hoping for in this supplement is something no one seems to be talking about. Updates on flakk missiles for armies that have not had them addressed yet. This could very well be the place for it, as well as the possibility to re-address the Hydra Flakk Tank. While this might be hoping for too much, I going to remain positive and hope for these updates and a small model release to follow shortly there-after.

This is Our Hobby
I did not expect such a strong and positive response from the community regarding this series. That is also why I posted up one yesterday. A couple notes about it.

The idea behind it is to get out other ideas and thoughts on our hobby here on Faeit 212. Our hobby is vast, and even ideas or concepts that do not follow my own are perfect for this series. Our hobby is world wide. I often see locations of hits sometimes pop up that I did not necessarily know existed. (that is rare but has happened more than once on the site with some islands in the Baltic Sea and others).

So in regards to those sending emails asking if this type of post is appropriate. It more than likely is, if it does one thing. Stays positive. Rants and dissing on others are really the one thing I do not want to read or have on the site. Otherwise send it in.

Because of the large response, I may dedicate Fridays (barring earthshaking rumors or announcements) to the series and try and get more than one per week. Even slipping one or two in at other times might happen depending on how many are in que.

My Projects
This week I am torn between getting my next faction done for Dark Age (the Brood), and hitting my next 40k project. Painting 78 models. I am going to imagine that it will fall onto inspiration, but I am dedicated to getting both done. I want to get these done, and get to my Dark Eldar.

Tau and Playtesting Information
I was not expecting any Tau information to be coming in really until after Daemons are to be released. So it was good to hear something regarding Tau rumors. Playtesting rumors are normally what we hear unless its very close to a release date. Playtest rumor themselves are fun to get, as it gives us a direction that the codex might be going in, and the ideas that are being thrown around. What form they take though in the final codex is often very different.

On that note, I do wish there was a way for us to get more playtest information. Perhaps the readers here in the community would be able to engage on their thoughts on how the rules are shaping up and thus possibly aid in the design of units and armies.

Daemons Are Next
There are deamon players everywhere you turn nowadays. I would imagine that if the Chaos Daemons were to be released, it would be a huge seller. This week I will try and get up some compilations on the rules and possibly what we will be seeing on Chaos Daemons for both 40k and Fantasy.

They are expected to be available for pre-order at the end of the month.