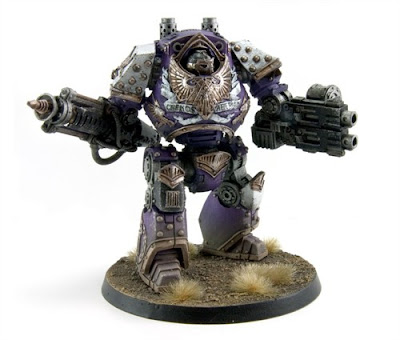 Forgeworld's Friday Release (notice that once again I am a day late) is a new Legion Contemptor Dreadnought. It is available now for pre-order with a release date of March 1.

Regarded as the most advanced and powerful pattern of Dreadnought fielded by the Legiones Astartes during the Great Crusade, the Contemptor draws not only upon technologies found in the more common MkIV and MkV designs, but also arcane systems taken from the ancient and shrouded lore of the Legio Cybernetica.
The significant advantages in speed and durability granted to the Contemptor over older Dreadnought patterns are not without cost, however, as it requires higher levels of maintenance than other designs. This has not prevented it from finding a place amongst all the Space Marine Legions though and demand for the new chassis is incredibly high.
Designed by Simon Egan and Will Hayes, the Emperor’s Children Legion Contemptor Dreadnought is packed with details themed specifically to this honoured Legion, such as the Palatine Aquila proudly borne upon the sarcophagus of the Dreadnought, and the unique ‘Phoenician’ pattern helm granted as a mark of valour among the Emperor’s Children.
A fantastic centrepiece for both Heresy-era Legion forces and 41st Millennium Chaos Space Marine armies, the Emperor’s Children Legion Contemptor Dreadnought is available to pre-order now for despatch from Friday 1st March.