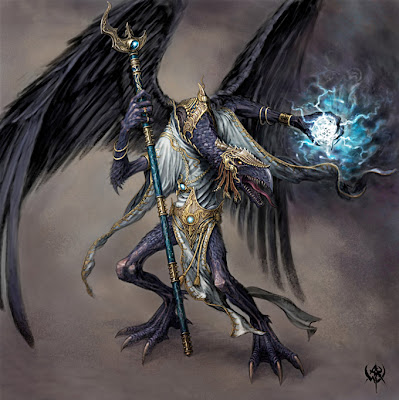 Daemons of Chaos are getting psychic powers now, which brings them on par in the psychic battles that can rage across the tabletops. Here is a new set of information just in concerning Daemonic Psychic Powers, gifts, and artifacts.


via Raziel from the Faeit 212 inbox
some stuff.. every unit got cheaper...
horrors are almost twice as few points as of right now.
daemonettes are now below 10 points..
bloodletters 4 points cheaper
plaguebearers also below 10 points.
big schock though : bloodletters t3 and plaquebearers t 4.

gifts:
lesser gift table:
1 : burning blood. each time you take a unsaved wound the enemy that caused the wound suffers d3 s 4 hits with ds 5. no cover saves allowed. those wounds count towards the combat result

2. cleaving strike: each hit on a 6 causes the daemon to strike with double strength (max 10)

4. spellbreaker: the daemon got the rule adamantium will

6 warpstalker : the daemon and his unit get +1 on reserve rolls..

greater gits :
1: corpulence : the daemon got +1 toughness and the special rule it will not die

2. daemonic toughness the daemon got the special rule feel no pain (4+)

6 unbreakable skin, the daemon gets a 3+ armor save.

and the 0 if you decide for it:

2. riftbringer: at the end of close combat phase in wich the daemon caused at least 1 unsaved wound you roll 2w6 and add 1 for each 3 unasved wounds the daemon caused. is the sum is 9 or higher a new unit of daemons will be created like the warpstorm table result number 12

3 souleater: at the end of the close combat phase, if the daemon caused at least one unsaved wound you roll a d6. on a 2+ the daemon gains another lifepoint (and may go up to 10 lifepoints)

5. warpflame. the first time this daemon is slain dont remove him from the game but take him from the table instead. the daemon may come back from reserve with 1 wound remaining.

artifacts:
eternal blade: s +1 ap - specialist weapon, honorseeker: at the beginning of the assault phase in wich the wielder is bound to roll a d3. the result will be granted to the wielders WS, initiative and attacks.

grimoire of true names: you may use it at any time in your movement phase. the target hast to be within 24" and at least one model with the special rule daemon has to be within the unit.
is the unit a enemy it has +1 on reserve rolls. is the unit a friendly unit roll a d6. on a 1-2 the all models in the unit (except the user) with the special rule daemon suffer +1 on the reserve rolls. if you roll a 3+ all models with the rule daemon have +2 on their invulnerable saves until your next turn.

portalglyph: may be used once per game. you may place it in the movement phase (does not matter when) place a 3" blast within 12" around the user. and let it scatter 4d6. if the marker goes off the board or cannot be placed it will move the distance so it can be placed (droppod) after that its a vehicle with the following profile : bs 0 12/12/12 hp 1

after placing the portalglyph you roll a d6 at the end of your movement phase. on a 4+ a new unit of d6 daemons (of your choisem horrors, daemonettes, plaguebearers or bloodletters) the unit got no upgrades but counts as a normal unit of its type.

the stone of the damned: at the beginning of the assault phase. every enemy charactermodels that are not daemons have to make a ld test. if it passes, nothing happens. if it loses. the model has -d6 on his ld value. if a model goes below 0 this way. it gets removed isntantly without saves allowed.
so for blue horrors: if a pink horror is slain place a blue horror marker.. at initiative 1 the blue horror attacks causing the enemy unit to suffer one s2 hit with ap -