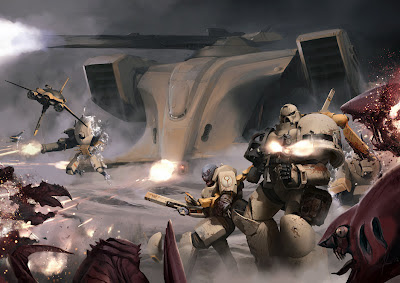 This email came in yesterday regarding the rumors of a Giant Krootox Giant and Firewarriors moving up in the world to BS4.


I want to say that this bit comes from a very much in the know source, who occasionally helps us filter through some of the rumors. The last few days we have had 4 sets of Tau rumors, and this email is in response to this one, and clarifying other rumors that are putting Firewarriors at BS4.


via the Faeit 212 inbox (has to remain anonymous)
I've never seen those kroot giant rules before (currently named the Krootonne).

There is a new large kroot model, but it's nothing like what's written, doesn't have a rider and doesn't have guns.

Fire warriors can't be upgraded to bs4, the squad leader has an upgrade that raises their BS though for (currently) 50 points and goes away if he dies.

I have like three versions of the rules, but I think some people are wish listing after getting hint of some stuff that's leaked.