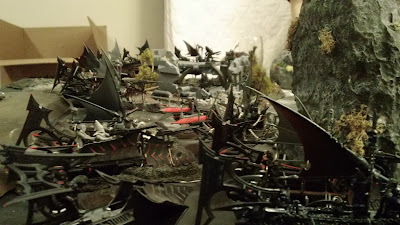 This sounds like a slaughter by the match up, and indeed when facing 8 flyers with a completely ground based Dark Eldar list, that is what I was prepared for. I had just finished a lot of my Raiders and Ravagers, so I just really wanted to use them, and to see what would happen. 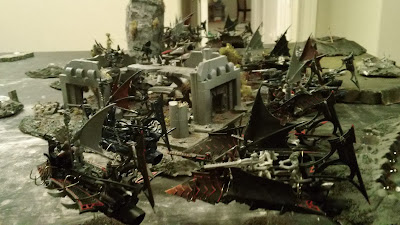 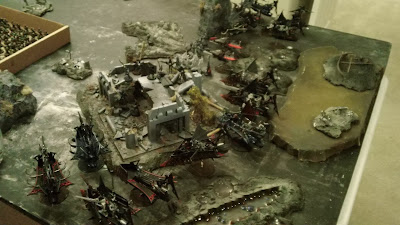 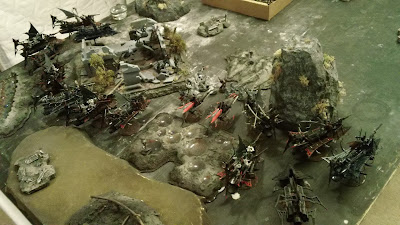 I did not take many pictures of the game, mostly because it was a late night game, and I was already tired. Here though is a quick battle brief on what happened.

On the opposing side of things, it was an Imperial Guard list with double force organization fielding 6 Vendettas allied with Blood Angels to field 2 additional flyers, Hurricane boltered Stormravens. It went something like this.

The Dark Eldar list had no way to deal with flyers, but I knew that going in, and just wanted to get a game in.  the game was the Scourge with 6 differing point objectives. On my side of the table were 3 objectives, and on his side was same. He had the 4pt objective on his side, and I was stuck with the 1pt, so I had to move it, and that is exactly where the harly death star unit went from the get go.

Now with so much of his army off the board round 1, my forces were on the move immediately, and were in his backfield quickly. In fact, my armies plan was simply to move as quickly as possible and make him fight for every objective.

The harley death star very much just camped at the 4 point objective all game, and claimed it as no mans land. This was observed, and they saw no real action all game (besides throwing a few haywire grenades at passing flyers).

The rest of the army did well, and the Vendettas were launching mass attacks against my skimmer force with grim efficiency. However its amazing at how often jink saves come into play when fielding this many skimmers. At games end, there were still 3 skimmer (2 raiders and 1 Ravager still in action.).

Overall, the dark eldar proved to be extremely ineffective at taking down flyers (I knew this going in), and only two vendettas were destroyed during the game, (one after it decided to go into hover mode) So coming into round 5, the Imperial Guard were still dominating the skies and the mobility. However, I had very much every objective in my grasp, and in round 5 his units had a lot of work to do.

The imperial guard dropped its troops all over the board, attempting a round 5 objective grab, and barrage of anti infantry pelted down dark eldar positions to knock them off the objectives. Being 5 man warrior squads they were slaughtered with the exception of the units in ruins.

In the end though, the Dark Eldar held onto only a single objective, while the Imperial guard were able to grab one for themselves. With First blood going to the dark eldar, and linebreaker to the Imperial guard, the game ended a draw.

Conclusion:
there were a couple things that could of made a huge difference during the game that I did not do.

First off, if designing a list for a tournament, take into account flyers, and have something that can deal with them. When its for fun, like this game, have fun.

Second, dark eldar are fragile, place those objectives in ruins if at all possible to keep alive whatever 5 man squad you can. I normally run lists that always have solid objective holders for the backfield, and with your dark eldar you should have the same where possible.

Third, when running a heavy skimmer force against an air cav army, Fly all your skimmers completely over to the opponents deployment board edge. You need to limit the initial punch as those flyers are coming in. A 4+ jink save is just not enough.

Over all it was a good game, and even though I knew it was going to be ugly for the dark eldar, I was able to make a game of it.