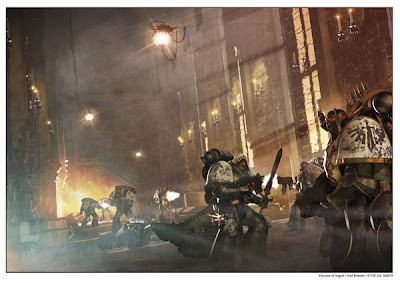 These were given to me with the condition to make it known, that these are already almost 2 months old. With that said, these are a playtest set for Dark Angels, and I for one am very much considering making Dark Angels my ally of choice. Lets look at what we have.


Please remember that these are from a play test set of rules, and are already a couple months old. This means that there are a lot of things that could change, be altered, added, and completely deleted.


via Faeit 212 "A must remain anonymous source"
Here's a compilation of the most recent Dark Angels playtest.
Anything not included is because it's the same, or I didn't notice a difference.
The universal DA rules are ATSKNF, Combat Squad and Stubborn.  HQs are all fearless.


HQ
Azrael
up to WS6, his gun is now a master crafted assault 2 12" 1 shot plasma, on top of a bolter.  (basically assault instead of rapid fire, but can't fire at long range) and is fearless.


Belial
Also WS6, but is now 170 points and still unlocks DW as troops.


Interrogator Chaplains
140 points, all units within 12" are fearless, not just his own squad
Rerolls misses and wounds in challenges.  Interrogator chaplains that win challenges against Independent Characters give you +1 victory point in a mission that uses victory points.


Elites
Chaplains are now elites and cost 100 points, but you can buy 1-3 of them as a single choice.  They can be upgraded to take specific banners.  At the start of the game they nominate a model in the squad they're attached to to be their "banner bearer" who must be modeled appropriately with the specific banner.  If the chaplain later leaves the squad, the banner remains.


Deathwing Terminator Squads are 215 points base, can swap to lightning claws for free, pay 5 points for thunder hammer / storm shield, and only models with storm bolter / powerfist or chainfist can take the cyclone missile launcher upgrade, which is now 30 points.
Deathwing assault works a little bit differently.  All Deathwing units and models in terminator armour attached to Deathwing units now come down on the first turn via deep strike without a roll if you wish you make a "Deathwing assault."
It specifically notes, however, the limitations of no more than 50% of your army being allowed in reserve, and that independent characters whether attached to a squad or not, count as a unit.


Dreadnoughts are a bit cheaper on points base, can be upgraded to venerable, and can upgrade their dreadnought close combat weapon to any ranged weapon (not just missile launcher or autocannon)


Fast Attack
Assault squads can remove jump pack, and get a 35 point discount on transport vehicle instead of a rhino/drop pod for free, but are otherwise unchanged.