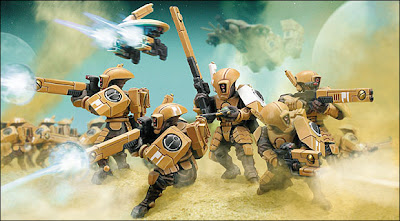 Kroot HQ selections, two new suits, and more. Tau rumors are here. For an April release or later, the codex is rumored to be done. I think there are just a lot of us that dying to get more bits of information on a Tau codex release. It will be one of the biggest releases of the year once it hits.

Please remember that although these come from a good source, that these are still rumors. Like always salt is required.

via an Anonmyous Source from the Faeit 212 inbox
None of the Forgeworld suits will be in the new Tau codex.

There are two new suits, however and the crisis and broadsides are both being redone and are very distinct from one another.

The hazard suits will remain as a Forgeworld supplement and are even referenced in the fluff in a few places. They're just non-standard issue and still considered in prototype for various reasons.

The Kroot hq replaces the 1+ requirement on fire warriors with a Kroot unit.