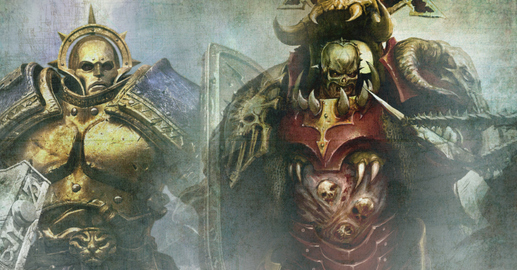 This weekend's White Dwarf is leaked onto Twitter tonight, as we get a good look at the new Stormcast Eternals. Holy cow that Thunderbolt Crossbow is massive!!!! Also shown are two unreleased Hero models for the Stormcast Eternals. So it definitely looks like we will see a solid one more week before heading over to the dark side with Khorne.

the two page spread of the Warlord Titan is also very cool to check out in the leaked images.

First up are the Highlight of this week's magazine release.

Highlights from this week's White Dwarf
via ShadowWolf32387 on Faeit 212
Highlights:
Stormcast Eternal Judicators are definitely next.
No mention of the bases or the pricing for new releases in the WD itself; but I don't discount they may be coming this week.
Thunderbolt Crossbow for the Stormcast Eternals is MASSIVE.
A company/battalion type structure for the Stormcast Eternal is shown for us to see, as well as history and organization in a written section.
The company/battalion image shows the support officers as well, the "Auxillary Command" that are included within the Stormcast Eternals, showing off two yet unreleased hero models for them.
One of the two remaining support officers carries what looks to be a standard, the other carries a blade and a trumpet.
The five Blood Angels with the hints for next week are actually just part of the 10 man squad shown in "Regiments of Renown", nothing tied to the hints at all.
No paint splatter except a quick four tile bit at the very end for the Celestial Vindicators.