Regarding Slaanesh for the Age of Sigmar 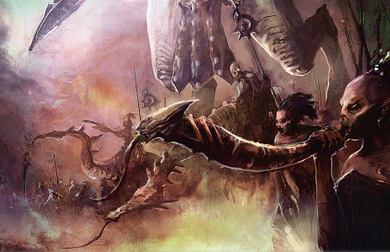 
via anonymous readers on Faeit 212 Regarding Slaanesh
what i read so far:

before the age of sigmar, when all races of the different realms were still united and chaos began to corrupt the new worlds, the Aelf gods Malerion and Tyrion went out on a search for Slaanesh. Slaanesh , still fed up from the Souls he devourd during the end of the old world, left his throne to hide and digest.

there is no mention of the complete removal of slaanesh himself (yet), the book focuses on Stormcast vs. Khorne and Nurgle vs. Sylvaneth.Although it mentions briefly that the followers of Slaanesh are fighting for his throne and that the other chaos gods (especially Tzeentch) is using the absence of the two Aelf Gods not only to spread Chaos amongst the Realms and weaken the alliances that Sigmar formed but also to manipulate them to his favor.

Maybe one of em/both will form a new God that replaces Slaanesh?

"Slaanesh is the Dark Prince, the God of Excess and Lord of Pleasure, and the most beautiful of all the Chaos Gods. Slaanesh's throne stands empty, however, for the god himself is lost. His minions wring their hands in anguish, while the remaining powers rejoice.