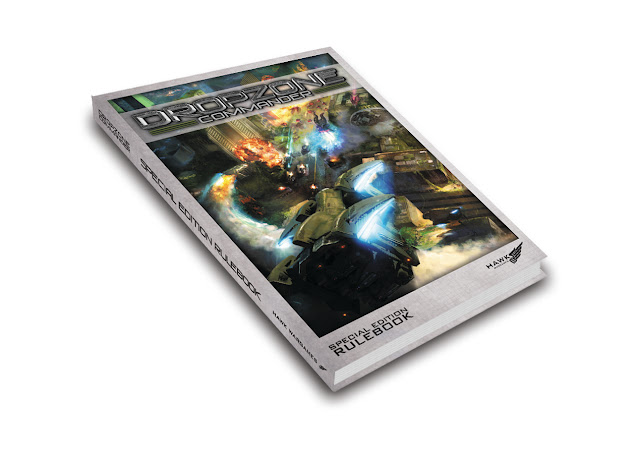 Hawk Wargames has a full pre-order list today for Dropzone Commander that includes a special edition rulebook, plus a new model release for each faction including the Resistance!! Not only do we have new pre-orders up, but we are also expecting new rules coming out very soon for the model releases hopefully this weekend, but definitely here by release day next weekend.

Here are the latest releases and this week's Pre-Orders
http://www.hawkwargames.com/collections/summer-releases

20 new pages, and over 50 new pieces of artwork sit alongside lavish photographic images, creating a gorgeous tome for your coffee table, sci-fi library or gaming room. This book comes in a printed box, to ensure the book is protected, and each book is cellophane wrapped.


This special edition still includes all the gaming content of the core rulebook, including:
- Core Rules: All the rules you need to play.
- Background: Rich and detailed setting for the DzC game universe, as well as in depth background for all four races and their units. You'll be in no doubt as to where you're fighting, why you're fighting and who you're fighting with!
- Army Lists:  The full stats, lists and special rules for all four races.
- Scenarios:  A wide selection of scenarios to keep your games fresh!
- Colour Schemes:  A wide selection of colour schemes and camouflage patterns are showcased for each race, giving you plenty of inspiration when painting your armies! Further hobby tips, articles and information will be made available from our downloads section in the coming weeks.
- Guest Painters Pages: Some inspiring work by keen gamers and painters unaffiliated with Hawk Wargames.
- Index: Double page index of terms and key phrases. 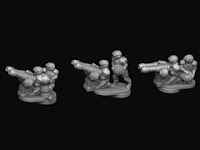 The man portable UM-17 Anti-Aircraft Weapon fires a terrifying stream of heavy calibre shells at the rate of hundreds of rounds a minute. Micro-computer aided targeting gimbals and a tipped phosphorus tracer rounds fired every 10th allow for accurate targeting, and overlapping fire training ensures that the enemy will be brought down with ease. 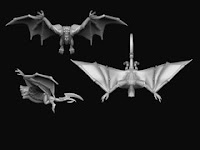 Vampires use the bat-like qualities of their hosts to cling on to the outside of Scourge dropships when entering the battlefield. Spying their prey, they unfurl their wings and pounce, latching onto unwary enemy from above and melting their way into the hull of ships, eager to get at the sweater meats inside. 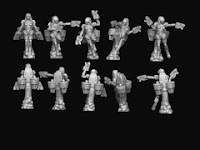 Valkyries use personal jump-jet booster packs to travel at speed across the battlefield, dodging and weaving through enemy fire before descending to unleash hails of submachine gun bullets on the foe. Retaining the mods and much of the training from Siren testing, they are nimble enough to escape all but the most masterful attacks, and the added manoeuvrability of their jump packs means that they can get to where the fighting is thickest quickly before cutting down the enemy with ruthless efficiency. Much like their mythical namesake, a Valkarie is often the thing the foe sees before they go to their afterlife.

In armament and tactics they share the style of Firstborns, but writ large over the whole battlefield rather than contained to a close fight. Bio-atomiser weaponry takes the place of wave guns, stripping the flesh from enemy infantry with ease, where an underslung energy glave replaces their energy blades but maintains their close offensive capability; a Samurai pilot’s blood always flows hot with the desire to destroy their enemies eye to eye.

Attack ATVs (All Terrain Vehicles) encompass anything from quad bikes to all terrain mobility vehicles; resistance fighters don’t care what it was, as long as they can strap a grenade launcher to it and drive at high speed towards the enemy. Attack ATVs are used by Resistance fighters for fast, nimble assaults, often in tandem with Freeriders and waves of technicals. They support troops in buildings with their grenade launchers, but rarely leave their quad bikes, taking a leaf out of the book of ancient earth native tribes, riding in circles close to or around their targets, firing into the enemy as they do so.