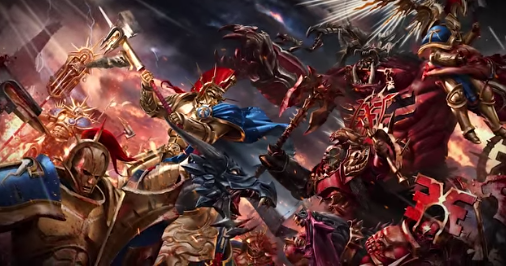 Alright, time to chime in.

With Games Workshop's release of the Age of Sigmar, the community is talking about the lack of point values in the new game and it's reliance upon Warscrolls. Rightfully so in my opinion, as this is a new concept, and quite controversial at the moment. Most games have points, or a cost to field a unit, and its hard to come up with a solid reason for abandoning a point value system.


This is not a review of the game..., but I want to talk about the concept of removing point values. I do congratulate Games Workshop at working towards innovation and pushing the limits of gaming to create something new and fresh, as a lack of this has been one of my biggest complaints about the current state of Warhammer. A modern update has been needed.

The biggest complaint I have about the lack of points, is that technically speaking.... GW did give us point values for the Age of Sigmar. Its just loosely called models now, or so far in many gaming circles wounds. If the values are greater by a third, then a sudden death victory can be had. The same is said for determining who won the game, its all based off of models lost, in essence making models the new point values in Age of Sigmar.

Remember that point values are inherently flawed, but thus too are using models in game when it comes to an even match. What Games Workshop has done here, is accept that games will be uneven, and try to put in place a system where uneven games have a balancing ruleset (smart in my opinion). Point values or models (might as well be interchangeable), are just a determinant on whether or not the sudden death rules are in effect, and for determining who won (models lost vs model fielded).

Do I think points were needed to be removed to achieve a naturally uneven game?,.... no. In fact I think it detracts from the game. Playing uneven point values in games is an excellent idea, as it makes them less a factor in creating your armies, and only a factor on the objectives that will determine who will win. Uneven games with balancing rules that cover it, are a great idea in my opinion, but..... having point values would of done it much better, and allow for more flexibility on sudden death objectives by allowing more options, adding different levels of sudden death victory conditions.