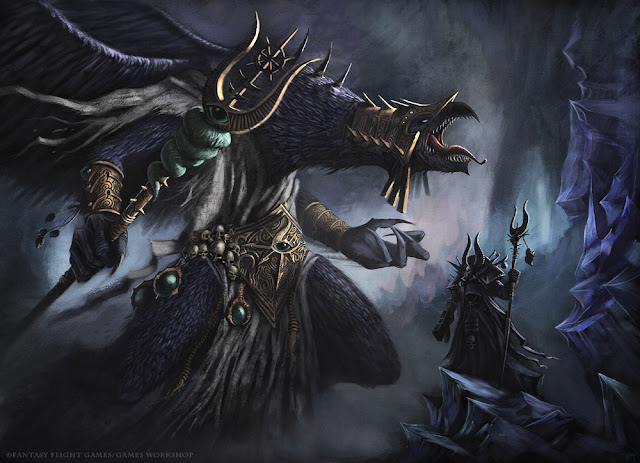 This month appears that it will wrap up the Stormcast Eternals and next month will be all Khorne for the Age of Sigmar. Following that though, it seems like things will get a little more interesting. I honestly can't wait to get back to 40k (still a diehard fan), and Tzeentch releases seem like a good place to go for them. Lets take a look at the latest.

Posted via Larry Vela on Bols
http://www.belloflostsouls.net/2015/07/gw-rumors-end-of-summer-schedule.html
via birds in the trees
– As mentioned, August holds Chaos terrain kits and Khorne minis.
– Look for a Khorne set of Blood Warriors with more weapon options.
– Look for 1-2 Khorne clampack characters.
– Into September look for a second Campaign book featuring Skaven, Dwarfs, Elfs, Tzeentch.
– Tzeentch will get a handful of new kits.
– There will be a very short 40K Tzeentch release window alongside the kits.
– Summer is rounded out by more Age of Sigmar racial kits then back to 40K for Fall.


via birds in the trees
– August will focus almost entirely on Chaos
– Look for Chaos themed terrain
– New Khorne boxed sets to build off of what is in the AoS boxed set – basically the Khorne version of the Stormcast Eternal kits we’ve seen these past few weeks.
– Look for Tzeentch to make appearance at the tail end of August
– Tzeentch is said to getting lavish attention this year in both Age of Sigmar and Warhammer 40,000.  Whispers of the new all plastic Lord of Change abound.
7/21/2015
Natfka
40k, Age of Sigmar, Games Workshop, Gaming News, News Headlines, Rumors, Warhammer 40k