Its finally here for pre-orders this morning, Forgeworld's Chaos Knight. The rules for the Chaos Paladin and the Errant are available today with the new model. On top of the Chaos Knight today, a new Daemon Prince for Nurgle is also up for pre-orders. 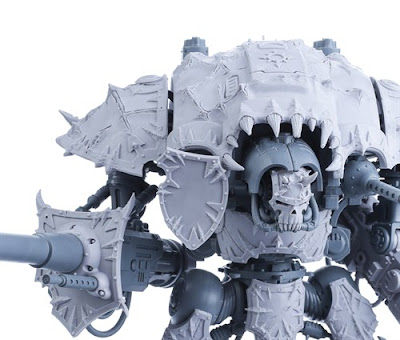 Chaos Knight £115.00
Cruel, self-serving and revelling in the slaughter and destruction of the battlefield, Chaos Knights are the antithesis of their loyal kin of the noble Imperial Houses. Allied to the Ruinous Powers, these Knights Paladin, armed with rapid-fire battle cannon, and Knights Errant, mounted with armour-melting thermal cannon, now bear the blasphemous panoply of their new masters, the vestiges of their previous allegiances having been unceremoniously ripped from their blood-stained carapaces.

These vile engines of destruction will have had many gifts bestowed upon them in return for their devotion to the dark gods. Some Chaos Knights may be refitted with powerful and tainted weaponry, augmenting their already fearsome strength in close combat with foe-reaper chainswords, barbarous corruptions of reaper chainswords adapted to gouge and eviscerate all who get within their reach. Whilst those who have given themselves over fully to one of the Chaos gods receive malevolent powers, granting them unnatural and terrifying abilities that few can match and defend against.

This kit, which stands at over 17cm tall, includes all of the parts needed to build either a Chaos Knight Paladin or Chaos Knight Errant. Its carapace, weapons and armour plates are adorned with the markings displaying their devotion to the powers of Chaos, and the kit also includes a foe-reaper chainsword and desecrated optional heraldic plates.

Rules for using the Chaos Knight in games of Warhammer 40,000 can be found HERE.

Those who have witnessed this loathsome disciple of Nurgle in action tell of a tidal wave of rot and disease which spills before Cor’bax as he enters the battlefield. Life corrupts at his touch, and any mortals unfortunate enough to survive are snapped up whole within his gaping maw to slowly perish and fuel the gifts of Nurgle Cor’bax will generously bestow upon the next world he attacks.

Cor’bax Utterblight, Daemon Prince of the Ruinstorm, is the latest addition to Forge World’s Horus Heresy Character Series. He stands more than twice the height of a man and his body is festooned with tentacles, spikes and the remains of those he has devoured, whilst a bloated tongue protrudes from his tooth-filled maw. A trio of Nurglings are also included for you to position on Cor’bax Utterblight or over his 120mm oval base.