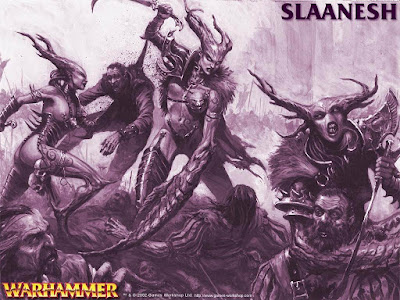 With the Age of Sigmar and the changing of the Chaos Symbol that we just recently had revealed, it seems like change is in the air once again. It could be a major change that could reach across game platforms to Warhammer 40k. Its still early to tell, but next week's hints for releases is very provocative.


The symbol change could just be that, Slaanesh changing her symbol for the Age of Sigmar, or something significant. I hardly think that its time to panic. A change in AoS though could very well see an eventual change to 40k.

Next Weeks Hints
"The chaos rules ... but where is the dark prince ?"