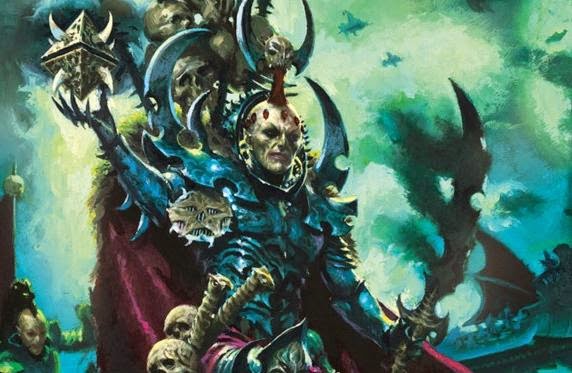 Yesterday we saw that the White Dwarf gives us the back page hints of "The Nobility of Commorragh" for next week's releases. We also saw what is very likely to be a new Archon model, and that the Archon limited edition codex includes a Haemonculus Covens Supplement.

This definitely gives us a few items that may be released next week.
1. New Plastic Archon (shown from leaked images)
2. Haemonculus Covens Supplement (revealed as part of the Archon edition codex)

I would imagine that there is not going to be a fourth week for Dark Eldar, although if there is, its possible that the Covens Supplement could be released in a fourth week. After all, the models that we are still expecting to see is quite a large list for one week.

A plastic Succubus.
The old model vanished off the GW webstore a week or so ago, and a new very blurry image has shown what may just be one. So its very possible that a new Succubus model would also come next week along with the new Archon. Here is a link to that horribly grainy image...
http://i.imgur.com/L4X5X7V.jpg

Asdrubael Vect
All rumors point to him becoming the Dark Eldar Lord of War in the new codex. Without a model it would be very unlikely that we would not get one this time around, and of course everyone is dying for a glimpse of the Dais of Destruction, Vect's cool ride. So would next week's releases include Vect? Most likely, but we will see.

So here is what is possible next week.
New Plastic Archon
Haemonculus Covens Supplement
Plastic Succubus
Asdrubael Vect both single model and Dais of Destruction