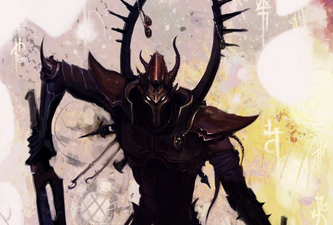 Apparently some of the codex has leaked in German, and a huge thank you to one of the readers here that translated the information for us on this site. This combined with the last set (from a different source) is starting to help give us a preview of the new codex.


Please remember that these are rumors from people that have apparently seen the codex. Talos in units of 1-3 have a little more excited about them!


via a reader who translated from this from a German blog
Hey Natfka!
I was perusing one of the German blogs I read, and this morning they had actual information direct from the DE codex.

My German isn't perfect, so I didn't fully understand the circumstances that resulted in people seeing the book already, but the information provided was easy enough to translate. Some tidbits:

Warlord traits are generic - better at combat, better at shooting, rerolls to hit, etc. Probably better off using the Strategic traits from the rule book still.

Beast packs have changed - min 12 models (of whatever type); chimeras are just demons now, so 5+ invuln. Flocks only have 3 attacks. Clawed fiend is cheaper.

Talos and Cronos engines can be taken in units of 1-3 and have FNP.

All vehicles can deep strike now.

Relics were vague - apparently a lot to do with limiting enemy psykers, and modifying leadership and forcing LD tests.

Webway portal is not placed on the table - lets the HQ and unit that takes it deep strike onto the table without deviating. Still 35 points.

Vehicle equipment is relatively the same - splinter racks, trophies, etc. Flickerfield is still in, and now we can give our vehicles stealth apparently as well (might be new version of night shields, translation was vague).

Some new weapons, but few and far between. Talos has a new option, S5 AP2 24" range small blast.

Voidraven was stated as being "very overpriced" but no point cost included. Bummer.

Splinter Cannon is, as expected, 4/6 salvo. Shredder does not have mono-filament, but does have Shred.

The portion on combat drugs and power from pain was difficult to translate, but it sounds like the combat drugs were simplified - 6 options, each adding +1 to a stat. WS, BS, S, T, A, I. Still universal across all models with drugs.

Power from Pain still effects the same units it always has, and includes FNP, Furious Charge, Rage, Fearless, and (the source says) more. The source didn't explain how PfP is activated well - the translation didn't make sense, so I'll refrain from trying to guess at what they were trying to say.

Overall, source said that DE fans will likely be disappointed - not because the book is worse, much of it stayed very much the same, but because GW once again didn't take the risks that would have made the codex interesting, and GW once again focused on simplifying the ruleset instead of adding to it.
9/26/2014
Natfka
40k, 7th Edition, Dark Eldar, News Headlines, Rumors, Warhammer 40k