What is Going on With Vect and Dark Eldar Lords of War? 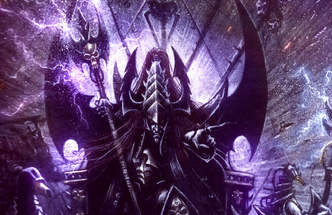 Everyone fully expected that we would be seeing Asdrubael Vect as a Lord of War with this Dark Eldar release, and by now its quite apparent that there is no lord of war in the upcoming Dark Eldar codex. There is lots of speculation on what will be happening, lets take a look at what may be in the pipeline.


Just to be clear, there is no Lord of War in the about to be released Dark Eldar codex. Digital images sof the army builder on the digital version of the codex have revealed the HQ section with no listings for a Lord of War. It was thought that with no Vect, we might see Urien Rakarth as a Lord of War, but apparently its not in the dice this time around.

Its quite possible, like many people have been discussing that we will see a White Dwarf Exclusive release for Asdrubael Vect, even in the coming weeks. It is rumored that in the next few weeks we will return to the End Times release of Book 2 dealing with Chaos, so the chances of seeing a Vect model next week are looking smaller.

Personally I think this is a missed opportunity, as Vect would of made an excellent Lord of War. I think GW will still capitalize on him with a future release, but look at how long it took for Dark Eldar to get the Voidraven Bomber, which has been done apparently for years.

So until I hear some solid rumors on this, I am not going to be holding my breath for it. We after all getting a Dark Eldar Coven supplement coming for pre-orders this weekend, so it would be hard to fathom a second supplement or release to include Vect and his Dais of Destruction.