Dark Eldar Troops Choices, Court of the Archon, and a New Weapon for the Succubus 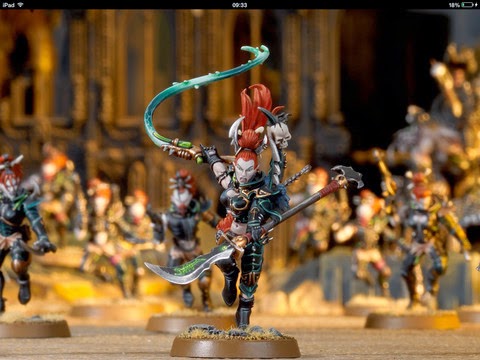 Its been hinted at now since the first grainy images first leaked, but a new succubus model looks to be coming, and along with it, a new weapon called the Archite Glaive. Also we take a look at rumors revealing what exactly are the troop choices in the codex, and the updated Court of the Archon.

The image above is a released image from the sample images of the new Dark Eldar codex ipad version from itunes.

via an anonymous source on Faeit 212
Court of the archon is now between 1 and 12 models chosen in any combination from the 4 types (so can have 12 sslyths if you want etc, thissame exact method is applied to the beastmasters where you now dont even need to take beastmasters if you wanted to), Lhamean 10pts, Ur-ghul 15, Medusae 25 and sslyth 25 and can take a venom or raider. Stats wise they look the same as before, some equipment changed though. The Lhamean now has a Shaimeshi blade, 2+ poison with a 6 to wound causing instant death (there's quite a few weapons with this rule). The medusae's eyeburst changed to a S4 template ap3.

Hellion's are fast attack, no way to change, same for wracks (elites) the only 2 squads that change their role are the kabalite warriors when they upgrade (3pts per model) to trueborn and the wyches upgrading to bloodbrides (3pts), they both are then considered Elites.

The succubus has a new weapon exclusive to her, the Archite glaive which can be used 1 or 2 handed, 1handed is S user, AP3 melee while the other is +1S, Ap2 and two handed.
9/27/2014
Natfka
40k, 7th Edition, Dark Eldar, News Headlines, Rumors, Warhammer 40k